, – A new report from Public Citizen reveals that the growth of exports to nations with which the does not have Free Trade Agreements (FTA) has outpaced the growth of exports to the 17 U.S. FTA partners, with both services and goods FTA exports lagging. This comes as the corporate interests that dominate private sector representation on the President’s Export Council, which meets Thursday, have reframed their support for more NAFTA-style trade pacts as critical to promoting the president’s goal of doubling exports over the next five years to create two million new American jobs.

“There are many ways to boost exports and create American jobs, but the data show that more of the same trade deals is not one them,” said Lori Wallach, director of Public Citizen’s Global Trade Watch.

The report unpacks the irregular methodology used in National Association of Manufacturers (NAM) and U.S. Chamber of Commerce reports to show how results were produced that promote the passage of three leftover Bush FTAs. A consistent and corrected use of the corporate groups’ own methods show that past FTAs have been associated with a substantial “export penalty.” For instance, once an arithmetic error is corrected for, the Chamber’s own methods would project a $30 billion loss in exports to , and over five years were these FTAs implemented.

“We’re all entitled to our own opinions about NAFTA-style trade deals, but we’re not entitled to our own facts,” said Todd Tucker, research director for Public Citizen’s Global Trade Watch and a report co-author. “U.S. government trade data shows that the export growth rate to non-FTA countries is double that to FTA partners, in contrast to corporate claims.”

Among the key findings of the report, “Lies, Damn Lies, and Export Statistics: How Corporate Lobbyists Distort the Record of Flawed Trade Deals” are:

·         If the difference between the FTA and non-FTA export growth rates for goods for each year were to be put in dollar terms, the total FTA export “penalty” would be $72 billion.

·         The has suffered large and growing trade deficits with its major FTA partners and with the group of FTA nations as a whole trade.  Even as trade flows declined because of the economic crisis, as of 2009, the had a $54 billion trade deficit in goods, excluding oil, with its 17 FTA partners. The president cannot achieve net job creation through export growth by establishing more FTAs that increase imports more than exports. Trade officials have occasionally admitted the unfortunate deficit-boosting trend of U.S. FTAs: In an October 2006 speech to a Korean audience, Bush administration official Karan Bhatia said that it was a myth that “the will get the bulk of the benefits of the FTA. If history is any judge, it may well not turn out to be true that the will get the bulk of the benefits, if measured by increased exports.” He added that, in the instance of and other countries, “the history of our FTAs is that bilateral trade surpluses of our trading partners go up.”

·         Contrary to recent corporate claims, the trade balance in non-oil manufactured goods with FTA partners over 2008-2009 was a deficit of $97 billion. The NAM reported that “over the past two years FTAs have resulted in a manufactured goods surplus of nearly $50 billion.” To achieve this outcome, the used “total export,” data, a measure including billions of “re-exports” of foreign products transshipped through ports but not made by workers. When the domestic export data employed by the U.S. International Trade Commission is used, the opposite result is produced.

·         The data show that the had an increased agricultural trade deficit with the bloc of 17 FTA partners, dispelling the frequent claims made by proponents that farmers have been the beneficiaries of NAFTA-style FTAs.

·         Since the began implementing NAFTA-style FTAs in 1994, the country has lost 4.9 million manufacturing jobs, as 43,000 American manufacturing facilities closed.

“There are real people behind these numbers,” said Travis McArthur, trade and finance researcher for Public Citizen’s Global Trade Watch and co-author of the report. “That’s why an honest, data-based discussion about the economic impact of FTAs based on the NAFTA model is critical, especially as the president considers how to meet his goal of doubling exports.”

The second section of the report thoroughly examines each of several recent reports and claims by the Chamber of Commerce and the National Association of Manufacturers and reveals irregularities that show the corporate lobby groups’ finding to be unreliable. For instance, Chamber reports claiming major export benefits from U.S. FTAs calculated FTA export growth using a non-weighted average of averages, which greatly overvalues large percentage gains of tiny trade flows, and then compared this to a weighted average of non-FTA countries’ export growth. It also used two different time period measures for FTA and non-FTA exports which further bias the outcomes.

President Barack Obama strongly criticized the NAFTA trade pact model and made commitments to trade policy reform during his presidential campaign. Despite this, some Obama administration officials have argued that implementing President George W. Bush’s FTAs with , and is the way to meet Obama’s export-boosting goals. The findings of this report show this view is not supported by the data on past FTAs’ performance.

“The administration should focus on implementing President Obama’s trade reform commitments,” said Tucker. “As this report shows, that approach would be more likely to produce export-expanding trade deals than would adopting the leftover Bush agreements as Obama’s own.” 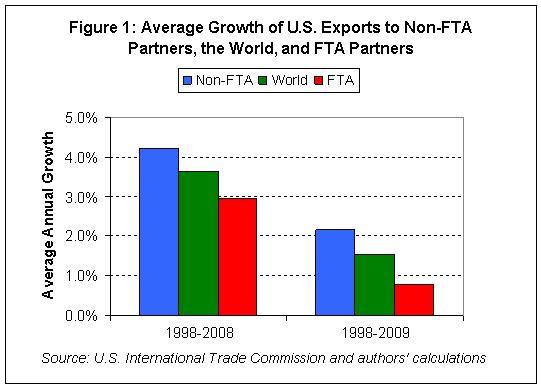