Post-Crisis Cage Match at the WTO

Last week at the WTO Public Forum, experts discussed the ways in which the WTO may be standing in the way of financial reform. In a session organized by the Our World is Not for Sale network, Lori Wallach took the stage alongside Hamid Mamdouh, Director of the WTO’s trade i 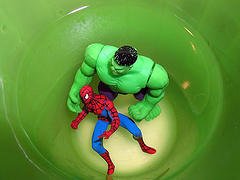 Wallach and Mamdouh, who have argued behind closed doors about whether WTO provisions restricting regulation could undermine financial regulation reforms, brought their debate public before over 100 audience members, including WTO committee chairs, ambassadors, negotiators, UN officials and NGOs.

Paez, who spoke next, underscored the need for financial regulatory reform and discussed how failing banks and speculative practices in the north pose serious risks for developing countries as well. Gould concluded the program by debunking the frequently touted example of Canada as the posterchild for WTO financial services liberalization -- claims are often made that Canada fully regulated the financial sector, thus escaping the worst of the financial crisis, while also fully liberalizing financial services at the WTO. In her recent report, Gould found that Canada, although under severe pressure to fully liberalize, did not, in fact, make extensive WTO commitments in the banking sector, and was therefore fully free to regulate responsibly.

We can only hope that the corporate chieftains at tomorrow's Global Services Summit heed some of the warnings about flawed trade pact deregulation terms highlighted in last week's Geneva debate.

Financial regulatory reform is an urgent issue that too often people feel is too abstract to possibly effect them.

This is just not the case. Speculative financial banking costs jobs, as the recent crisis has taught us. Reforming and also enforcing those rules that allowed it to happen is crucial for healthy domestic and global economies. If countries are unable to do so because of WTO commitments, then the the WTO needs to change.

I'm glad to see that this issue is getting attention in Geneva!