There is some conventional wisdom that the GOP is more united than Democrats in favor of unfair trade deals. See for instance this ridiculous aside from the White House in the New York Times Magazine this weekend:

This is silly. Polls show that GOP and independent voters are at least as opposed to these deals as the Democratic base. (See here and here.) And, nowhere in the "everything and the kitchen sink" 48 page GOP "Pledge to America" unity document do they talk about trade or offshoring - showing that there is not a heckuva lot of GOP unity in support of unfair trade.

GOP candidates are responding to the public support for fairer trade. This cycle, we're seeing a much higher number of GOP running on fair trade than in the last two cycles, including pledging to renegotiate trade deals and end tax loopholes for companies that offshore jobs. Some are even attacking their Democratic incumbents' votes against fair trade (a vote for China PNTR, for instance).

But the message that I have seen probably 100 GOP candidates run on in this cycle is attacking the incumbent Democrat for voting for a stimulus bill with Buy America provisions criticized as weak.

Long-time readers will recall that we covered this issue in detail back in early 2009:

Enter Sarah Palin. Despite never having clarified her views on trade policy on the VP campaign trail (or in her previous run for governor of Alaska), Palin raised eyebrows earlier this year when she attacked the stimulus bill for not requiring that all money be spent here in America. Palin wrote on her Facebook wall about the stimulus bill:

“We were promised it would provide “green jobs” for Americans, but 80% of the $2 billion they spent on alternative energy went to purchase wind turbines built in China!”

At the time, I figured that this was just an accidental or not fully thought-through Facebook post. Little did I know that Sarah Palin was an absolute genius whose Facebook post would spark a mass GOP fair trade wave: virtually every GOP candidate across the country is today campaigning on this loophole in the stimulus bill.

So, what would be the solution to this problem? Well, for starters, we'd have to revisit the procurement commitments in the World Trade Organization (WTO) and other unfair trade deals in order to get even close to 100% true Buy America rules in government spending. 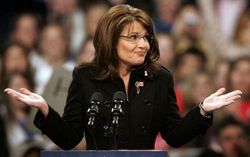 Even many free traders feel very strongly that there are moral, environmental and economic reasons to ensure that our tax dollars are used to support local jobs and production. But, as we've long argued, the WTO closes off this key, sovereign policy space. (See our book "States' Rights and International Trade" for more.) Luckily,

(Ed note: In the last two election cycles, Public Citizen has brought you detailed analysis of around 100 competitive and open seat congressional races. We found that the role of trade and offshoring increased in 2008 relative to 2006, and by all indications, 2010 will set a new record. Of about 170 races we are tracking, trade is playing in about 90 percent of them (150). That's right, we'll be releasing detailed candidate profiles of over 350 candidates - GOP, Democratic, and some third party.)

(Note: Public Citizen has no preference among the candidates.)