Home Archives Subscribe Back to TradeWatch.org
Tell the Obama Administration that adopting Bush's Korea trade deal is political suicide
A Bad Deal for Everyone

Before many election results were even in, the Chamber of Commerce was gleeful at the high-profile election losses of key fair traders, including several that had co-sponsored the TRADE Act.

But, as we've come to expect from the Chamber, they don't ask the right research question: relative to what?

In our report from last week "Election 2010: The Best Defense Was a Fair Trade Offense," we don't cherry-pick a few anecdotes like the Chamber, but instead look at the full universe of over 182 competitive and open-seat races. We profile the trade positions of over 360 candidates in these races. We then looked at how different groups fared as a whole.

Our finding is pretty conclusive: on the whole, Democrats who ran on fair trade were more likely to survive the GOP tidal wave than those that did not run on fair trade. This is true even controlling for the competitiveness of the race.

In fact, despite losing 24 TRADE Act cosponsors to defeat at the polls (on top of the 7 cosponsors that retired), those cosponsors that survived will now make up an even greater share of the Democratic Caucus in the next Congress (56% in 2010 vs. 60% in 2011).

Meanwhile, the share of the Democratic Caucus that is against fair trade has shrunk to negligible proportions. For instance, of the 11 anti-fair trade Dems in the New Democrat Trade Task Force, only 7 will be returning to the new Congress. (This takes their share of the Democratic Caucus from an already low 4.2% to a tiny 3.7%.) Or look at the 23 anti-fair trade Dems that signed a letter to President Obama in support of Bush's pending trade deals. Only 16 will return, which means their percentage of the Caucus went from 9% to 8%.

But this is only one side of the story. As we've been showing all week, Tea Party voters and candidates are also highly skeptical of unfair trade policy. This year, Republicans were willing to take a page from (what had been until recently) the Dems' hymnal and attack job offshoring. So, of the 24 TRADE Act sponsors that went down in defeat last Tuesday, 15 of them faced GOP opponents who ALSO campaigned on fair trade. 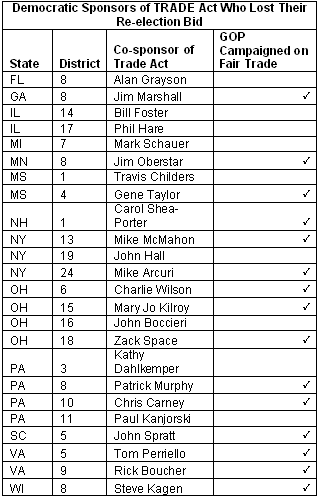 In other words, the election was hardly a win for unfair trade, and any corporate lobbyists who think otherwise are in for quite a surprise.