A Bad Deal for Everyone

I was in Seoul this week during the lead-up to the G-20 and the Obama-Lee announcement that the Bush Korea-US (known as KORUS in South Korea) FTA is thankfully still deadlocked. 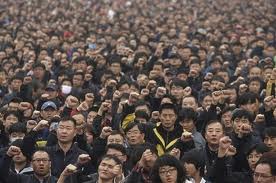 Before my trip to Seoul this week, the reasons for the American public's opposition to the NAFTA-style trade model were fairly clear to me. After all, it's a big ask for the American public to support more of the same job-killing brand of trade agreement in the midst of an economic crisis even after President Obama campaigned on promises of reform.

However, for all of the accusations of self-interested protectionism lobbed at Americans who are critical of this model, one would think that Koreans were clamoring for the completion of the Korea-US FTA.

Much to the contrary - this week unionists, farmers, peasants, and students filled the streets of Seoul daily and nightly to their outrage/dispair with the agreement. From marches, to candle light vigils, to actions outside of the parliament, Koreans made it clear that the current agreement is unacceptable, as are the proposed solely commercial modifications.

Koreans expressed anger about various aspects of the agreement - the potentially crippling effects on Korean farming and the 30% self-employed 'mom and pop' establishments; new rights KORUS gives to about 1,000 U.S. corporations to challenge Korean subfederal and federal laws in private tribunals; opening the floodgates to U.S.-style financial deregulation. Americans and Koreans actually share a sizeable amount of common ground in their criticisms of the current KORUS FTA.

The Korean public's outrage about the KORUS FTA is unlikely to cool down anytime soon. The question is whether or not President Obama will seize this opportunity to follow through on his campaign promises to reform the Bush trade model and deliver a trade agreement that both Americans and Koreans can support.

Not surprising, the US played their classic "North Korean gambit" under which to ram through KORUS FTA and with headlines peddling fear of imminent war, whatever protest by Koreans over this ramrodding will be muted.

Also worth noting were the measures South Korea proposed to control capital flow, specifically Tobin taxes in response to the US's quantitative easing (QE2) stunt - and how that now is in danger with the current threat of provoked war with North Korea.