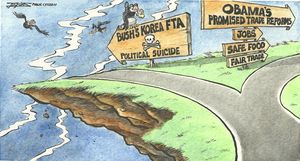 In a year when 205 Democratic and Republican candidates ran against the status quo of job offshoring and unfair trade, it’s unbelievable that President Obama would consider reviving a job-killing, NAFTA- style trade deal with Korea negotiated by George W. Bush in 2007. But that’s exactly what seems to be happening.

We're already pushing over 2000 signatures. Sign the petition today, before it’s too late!

Be sure to spread the word to your friends, family and fellow activists. Our voices can send a powerful and loud message.