The following is recent dispatch from the Climate Reality Tour - a movement building bike tour. My bike partner and I are biking from West Virginia to the U.N. Climate Talks in Cancún to connect the dots between Globalization policies and global climate change. 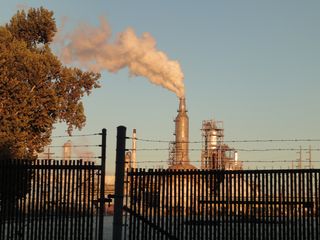 +++ For most folks, there might be nothing less sexy than industrial policy. An abstract government process for deciding how to intervene in the globalized marketplace to support what major industries - often quite polluting ones. It lacks the high-speed flare of bike culture (in which we are awash), the colorful bouquet of community gardening, the human drama of environmental justice struggle.

But green industrial policy might just be what saves the planet. It’s a tragic that it’s sultry allure is lost on us.

We were impressed in our interview with Bill Londrigan, the President of the Kentucky AFL-CIO, how deeply he understood the need for holistic green industrial policy – one that moves rapidly to phase out dirty industry and replace it with green jobs. “Hopefully we can make some rational decisions about where we need to go… to make sure we can evolve to where [energy and industry] aren’t harmful to the environment” Londrigan says. “And the government could play a great role.”

But we are talking more than your typical one-time weatherization jobs and beyond just the renewable energy sector. Green industrial policy can tie the other threads together, and create jobs and healthier communities in the process. As has been discussed, if we shifted our food, transit, and energy policy we could address the injustice and unsustainability in those systems. We can imagine regional bike manufacturing with green energy, and labor-intensive local food systems underwritten by our government. This would be welcome industrial policy to shift from unsustainable centralized corporate status quo.

And, to make any industrial policy really effective it should be integrated with trade and other policies so we’re not undermining our own efforts to support a given sector, like green technology for example, by simultaneously subsidizing with our tax dollars, and recruiting imports that undercut those subsidies. So for sustainable industrial policy, we have to re-evaluate our foreign economic infrastructures as laid out in NAFTA and at the WTO.

Re-examining U.S. foreign economic policy makes it a lot sexier. It puts all sorts of causes celébre on the table: global south deforestation (the north having already put all that forest carbon into the atmosphere), loss of endangered species (charismatic mega-fauna!), climate refugees (beyond today’s global trade refugees), solidarity with indigenous peoples and afro-descendents’ land and cultural rights (in global north and south), water purity (and rights), and the like.

Tackling industrial policy and trade policy should be a concern of all those who want to see a sustainable economy prevail on this earth. It was great to see the depth of understanding in Louisville, and many of the places we’ve traveled since. What even better, is that by calling for green industrial policy we can be sure to involve worker’s voices in the movement for sustainability. Bill Londrigan gets that. “You can’t stop climate change unless we have control over the power of corporations to continually pillage the planet” he told us. And he’s right. If we’re to build the sort of movement capable of averting global climate catastrophe, we are going to need to realize how alluring a green industrial policy really is. It’s a real looker, all right! I don’t care what anyone says; I think it’s sexy and engaging. It draws people in. What’s more it’s dependable and stable. This could be the healthy relationship that working people always deserved but never got.

Question is, why do so many of us need convincing? Why would the fate of a forest dweller in the Amazon (plant, animal, or human), be more interesting to the average climate activist than the fate working class industrial or energy sector workers? Or of the typical U.S. environmental justice community, for that matter? We all have some soul-searching to do on that front, but if we can build coalitions to push for a truly sustainable economy, perhaps we’ll find some answers as we fight alongside one another.

Here’s to the long haul, folks! And to green industrial policy that works for workers and the climate!