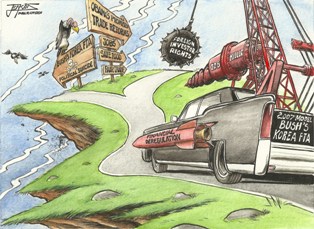 The U.S. Chamber of Commerce and GOP congressional leaders must be gleeful that they are getting the Obama administration to take ownership of another Bush NAFTA-style trade deal that would simultaneously favor their job offshoring agenda and put Obama’s re-election in peril.

Why the administration would consider moving another NAFTA-style trade deal is inexplicable, especially given that export growth under past U.S. free trade agreements was less than half of that to the rest of U.S. trade partners. Bush-era International Trade Commission studies show the Korea deal will increase America’s trade deficit, and Americans across diverse demographics are united in opposition to more-of-the-same trade policy.

Choosing to advance Bush’s NAFTA-style Korea free trade agreement rather than the new trade policy President Obama promised during his campaign will mean more American job loss and puts the White House at odds with the majority of Americans who, polling shows, oppose more-of-the-same job-offshoring agreements.

Merely tweaking the “cars and cows” market access provisions of Bush’s NAFTA-style Korea trade pact but leaving in place the offshoring-promoting foreign investor protections is a slap in the face to the majority of Americans who, according to repeated polls, oppose the same old trade policy that has cost millions of American jobs.

The Korea free trade agreement (FTA) did not have to instigate what will now be a nasty political battle. It could have provided the perfect platform to implement President Barack Obama’s promised trade policy reforms to remove the worst job-killing aspects of former President George W. Bush’s North American Free Trade Agreement (NAFTA)-style deal and rebuild bipartisan support for trade expansion. Within weeks of Obama’s June announcement about moving forward with the Korea deal, 110 members of the U.S. House of Representatives sent a letter to Obama warning that they would oppose the pact in its current form – noting that moving forward with “another job-killing FTA” was “unthinkable” in the current economic climate. They laid out essential reforms needed to the pact’s labor rights, foreign investor offshoring promotion and financial deregulation terms needed for them to support the deal.

Labor unions and consumer and environmental groups also quickly reiterated their calls for the administration to fix the Bush Korea text by removing the worst NAFTA-style terms so that it could become the first in a new era of widely supported trade deals. In September, Obama received a letter signed by more than 550 faith, family farm, environmental, labor, manufacturing, consumer protection and civil society organizations calling for the same core reforms and noting that they could not support the deal in its current form.

The current text includes the extraordinary investor rights that promote offshoring and expose domestic financial, environmental and health laws to attack in foreign tribunals. Signed before the financial crisis, the pact calls for financial services deregulation that is at odds with the lessons we’ve learned from the economic crisis and that may conflict with recent reforms made by both the U.S. and Korea. The pact also explicitly forbids reference to the International Labor Organization’s conventions that establish internationally recognized core labor standards.

During the 2008 presidential campaign, candidate Obama pledged to chart a new course for American trade policy that could create jobs. In speeches, town hall meetings, questionnaires, mailings and paid advertisements in key swing states, Obama said that he would exclude from the pact language the damaging foreign investor rights and their private enforcement that threaten public interest safeguards and promote job-offshoring. He also said he would include strong, enforceable labor and environmental protections. The Korea pact fails on all these scores.

The midterm elections featured an unprecedented 205 candidates campaigning on fair trade themes and against the export of U.S. jobs. Campaigning on these issues is a smart strategy because, after witnessing progressive economic damage over 15 years of NAFTA-style trade agreements, Americans of all stripes are more opposed to them than ever. A recent NBC News-Wall Street Journal poll found that a record number of Americans across stunningly diverse demographics think current U.S. trade policy has hurt them economically.

It is pathetic that Obama is going ahead with this huge favor for the Chamber of Commerce after they spent the last six months spending foreign money to kick out his allies in Congress (allies who Obama liked to campaign against by blaming "Washington" for everything).

Washington needs fixing, alright. It needs an end to politicians who campaign against Washington and then go to Washington and do exactly what the corporate thugs tell him to do. It needs Democrats who blame Republicans and the Chamber of Commerce, not "Washington," for the country's problems.

Notice how this FTA was ramrodded through under the threat of imminent war. With blood curdling headlines dominating the headlines in Korea regarding the potential threat of a provoked all-out war with the North, any protest over the FTA will be muted.

Very convenient. 2 weeks after the FTA failed, a provoked artillery exchange and then America's insistence on carrying out the largest joint-naval exercise ever with S.Korean forces against any measure of sanity or prudence.

Also notice the continuity of agenda between Bush and Obama's administrations. The bankers run America.