Home Archives Subscribe Back to TradeWatch.org
In Speech to U.S. Chamber, Obama Gets It Wrong on Trade, Jobs
Don't abuse me: the prudential quandary 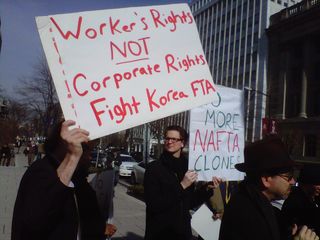 Today, workers’ rights and fair trade advocates gathered at Lafayette Square in Washington, D.C. ahead of President Obama's address to the Chamber of Commerce. They urged President Obama to defend American jobs and oppose NAFTA style “free trade” agreements such as the Korea FTA. Groups represented included the National Nurses United/California Nurses Association (NNU) and ThinkProgress, among others. Donna Smith of NNU stated, “the Chamber of Commerce represents Wall Street and corporate greed, not working people. It encourages employers to roll back rights and living standards for working people. It promotes the outsourcing of U.S. jobs, and spends hundreds of millions of dollars at home to influence Congress to achieve tax breaks for big business and block reforms for working people.” Some of those present also voiced their distaste with President Obama’s support for the to Korea trade deal, which stands in stark contrast with his campaign promises on trade.