Want to hear economic and trade policy issues discussed in an accesible and engaging manner? You can 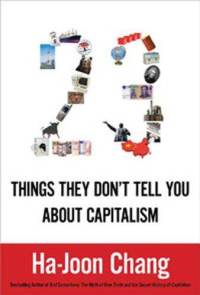 do little better than stopping by two events tonight and tomorrow in DC where Ha-Joon Chang is speaking on his new book 23 Things They Don't Tell You About Capitalism.

The first opportunity is tonight at 6:30 pm at Busboys and Poets on 14th St., NW, cosponsored by the Center for Economic and Policy Research page. The second opportunity is tomorrow at the New America Foundation at 12:15 pm.

Here's a little bit more about the book and Chang, from the promotional materials:

We may like or dislike capitalism, but surely we all know how it works. Right? Wrong. Today, most arguments about capitalism are dominated by free-market ideology and unfounded assumptions that parade as ‘facts’. With the help of the ‘Dead Presidents’ on the dollar bills, Walt Disney’s Rescuers, an Indian bus driver named Ram, and sheep-burning French farmers, Ha-Joon Chang’s new book, 23 Things They Don’t Tell You About Capitalism (Bloomsbury USA, January 2011), tell the story of capitalism as it is and shows how capitalism as we know it can be, and should be, made better.

Ha-Joon Chang teaches in the Faculty of Economics at the University of Cambridge. His books include the international bestseller Bad Samaritans: The Myth of Free Trade and the Secret History of Capitalism and Kicking Away the Ladder, winner of the 2003 Myrdal Prize. In 2005, Chang was awarded the Leontief Prize for Advancing the Frontiers of Economic Thought.

Praise for 23 Things They Don't Tell You About Capitalism:

“Chang, befitting his position as an economics professor at Cambridge University, is engagingly thoughtful and opinionated at a much lower decibel level. ‘The “truths” peddled by free-market ideologues are based on lazy assumptions and blinkered visions,’ he charges.”—Time

“Chang presents an enlightening précis of modern economic thought—and all the places it’s gone wrong, urging us to act in order to completely rebuild the world economy: ‘This will [make] some readers uncomfortable…[;] it is time to get uncomfortable.’”—Publishers Weekly

“For 40 years, I have worked as a journalist and trained thousands of other journalists from my former perches as a University of Missouri Journalism School professor and as executive director of Investigative Reporters and Editors. I have written newspaper articles, magazine features and entire books with heavy doses of economics policy and business behavior. I wish the book 23 Things They Don’t Tell You About Capitalism had been available when I was a rookie; I would have been more alert to the hands-off-business catechism by which Americans are relentlessly indoctrinated.”—Steven Weinberg, Remapping Debate

“Shaking Economics 101 assumptions to the core … Eminently accessible, with a clearly liberal (or at least anticonservative) bent, but with surprises along the way—for one, the thought that markets need to become less rather than more efficient.”—Kirkus Reviews

“I doubt there is one book, written in response to the current economic crisis, that is as fun or easy to read as Ha-Joon Chang's 23 Things They Don't Tell you About Capitalism.”—AlterNet Executive Editor Don Hazen