Korean Public Opinion Against the FTA
Wisconsin, Korea, and the attack on working families

Note: This statement was submitted for the record to the House Ways and Means Committee’s Subcommittee on Trade for its hearing today on the U.S.-Panama FTA. 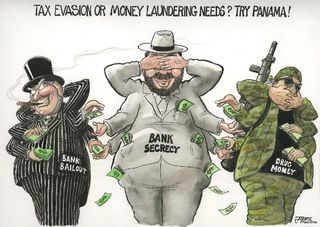 Members of Congress and the public were very clear that two problems must be remedied before Congress should even consider a “free trade agreement” (FTA) with Panama. First, Panama needed to clean up its bank secrecy practices and get rid of bearer shares and other money-laundering tools; and second, the FTA must be amended to ensure that Panama-registered corporations cannot use the FTA to attack U.S. anti-tax haven regulations. Neither of these conditions has been even halfway met.

Panama is one of the world’s worst tax havens. It is home to an estimated 400,000 corporations, including offshore corporations and multinational subsidiaries. For decades, the Panamanian government has pursued an intentional tax haven strategy. It offers foreign banks and firms a special offshore license to conduct business.  Not only are these businesses not taxed, but they are subject to little to no reporting requirements or regulations. According to the Organisation for Economic Co-operation and Development (OECD), the Panamanian government has little to no legal authority to ascertain key information about these offshore corporations, such as their ownership.

Because of this secrecy, precise numbers of the taxes lost to Panama do not exist. However, according to the U.S. Office of Management and Budget, eliminating tax evasion in tax havens overall could save U.S. taxpayers $210 billion over the coming decade,  while the Senate Committee on Homeland Security and Government Affairs estimates a savings five times as great.  Since Panama is one of the world’s leading tax havens, the country is likely to account for a significant share of those revenue losses, which could be used to meet other urgent policy priorities at home.

Even after several years of intensified scrutiny from the G-20, the OECD and the international community, Panama is the only country in the Western Hemisphere to not pass the OECD’s peer review process.  OECD experts said that sufficient time needed to pass to see how well Panama’s recent flurry of tax reform commitments worked in practice, after years of avoiding even minimal transparency commitments. Even the infamous Cayman Islands tax haven was able to pass this test,  again confirming Panama’s preeminent status as a leading site for tax and regulatory arbitrage.

Panama promised for eight years to sign a Tax Information Exchange Agreement (TIEA). Yet when it finally signed a TIEA with the Obama administration in November 2010, the agreement did not require Panama to automatically exchange information with U.S. authorities about tax dodgers, money launderers and drug traffickers. (The U.S. and Canada have such an automatic system.) Panama also gave itself until the end of 2011 to make a series of domestic legal changes to facilitate the non-automatic information sharing envisioned by the new TIEA. Under this system, Panama will produce information only in response to specific, case-by-case requests after U.S. authorities have already obtained and provided to Panama a great deal of information about potential wrongdoers.

Moreover, Article 6 of the 2010 TIEA allows Panama to refuse an information request “where the disclosure of the information requested would be contrary to the public policy of the requested Party.” Given Panama’s longstanding public policy of encouraging tax haven activities, this Article 6 loophole is big enough to drive an offshore economy through.

Panama’s recent actions give little hope of the government’s good faith in making these changes. In January 2011, Panamanian official Frank de Lima bragged to a reporter that little would change with the TIEA: “We’ll maintain competitive advantages like bearer shares (other jurisdictions have eliminated them) and we won’t immobilize bearer shares as other jurisdictions have done.”

Panama’s executive branch recently drafted Know Your Client legislation (Bill Number 275, presented on Jan. 11, 2011), that started off weak and was even further watered down in the National Assembly.

First, lawyers who violate the Know Your Client legislation would see their temporary suspension period from offering registered agent services shrink from one to three years in the Ricardo Martinelli administration’s proposal, to as little as three months in the National Assembly-approved legislation (see Article 20).  In other words, after a small slap on the wrist, a lawyer could return to offering nontransparent services to anonymous tax dodgers, assuming the laws are enforced in the first place.

Second, the Martinelli proposal would have required resident agents to: 1) identify their clients and verify that identity through a paper trail; 2) ascertain the purpose for the creation of the corporate entity; and 3) share information with the government under certain extenuating circumstances. But the National Assembly scaled this back so that, in order to comply with item No. 2, “the resident agent shall not have the obligation to carry out any proactive step or verification of the information provided by the client.” (Article 3, as amended.) In other words, trust, but do not verify.

Moreover, the fines for failing to preserve financial secrecy under the Know Your Client legislation are as much as five times larger than the sanctions for failing to cooperate with the legislation’s limited information gathering and cooperation mandates.  The Martinelli administration signed the weak bill into law on February 1.

Before voting on any FTA, those in the U.S. Congress who have long raised concerns about Panama’s financial secrecy will want to be able to verify that newly announced changes in the country’s policy are resulting in real changes in practice. This would include seeing a sustained record of prompt compliance with U.S. government requests for tax information exchange under the non-automatic TIEA. Financial secrecy legislation has to be comprehensive, and bearer shares must be fully eliminated and immobilized.

Verifying that Panama is actually making these changes will take some time. Usefully, this gives the Obama administration the space to modify the actual terms of the FTA negotiated by the Bush administration that would make fighting tax haven abuses difficult. For instance, the current FTA constrains one of the most important tools policymakers have in fighting financial crimes and wrongdoing – restrictions on transfers to and from the countries that provide financial secrecy like Panama. Moreover, the FTA gives the tax haven government of Panama and the 400,000 corporations registered there new rights to challenge U.S. anti-tax haven policies for cash compensation outside of the U.S. judicial system. Read Public Citizen’s report about how the Panama FTA’s current text would make fighting tax havens difficult.

Corporate use of these investor-state rules is far from hypothetical; there are nearly $9.1 billion in claims in the 14 known investor-state cases outstanding under NAFTA-style deals. And under the Nations Energy v. Panama case under the U.S.-Panama bilateral investment treaty (BIT), a tribunalist argued that changes in tax policy could represent violations of BIT rules, which are replicated in Chapter 10 of the U.S.-Panama FTA: “The BIT’s broad definition of investment does not allow one to limit indirect expropriation to cases involving property. The formula also covers instances of associated economic rights related to an investment, as in the case of the tax credits … they have been denied a right that constitutes an enormously significant loss in terms of the overall value of the investment.”

Corporations should not have the ability to challenge U.S. anti-tax haven policies under an FTA, especially when the government of Panama is given the right under the TIEA to refuse to cooperate with U.S. information requests. President Barack Obama promised during his campaign to reform these FTA foreign investor provisions, and policymakers will be looking to see these changes made before casting a vote on any U.S.-Panama trade agreement.