As finance mininsters descended on Washington, DC yesterday for this week's G-20, World Bank and IMF meetings, over 125 organizations representing 121 countries called on them to end the WTO' risky financial services behavior. 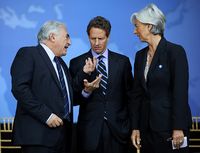 The WTO has repeatedly ignored warnings from the United Nations and other experts to lift outdated restrictions on financial regulation in light of the 2008-2010 financial crisis. And so far the G-20 has not intervened to help remedy this problem. In fact, despite the G-20's stated goal of ensuring financial stability and preventing future financial crisis, repeated G-20 communiques have recommended conclusion of the Doha Round without addressing WTO limitations on some of the financial policies needed to prevent future financial crisis.

International labor, religious, farming, environment, food security and trade and finance groups are urging the G-20 finance ministers to take a more responsible position on WTO to prevent outdated WTO rules from undermining the financial regulatory reforms our governments must implement to prevent future crises. Their letter comes on the heels of a statement made by over 250 international economists criticizing trade agreement limits on capital controls.