For the second time in a week, reports have surfaced about the WTO clobbering a U.S. consumer labeling policy. Last week, the U.S. voluntary dolphin-safe tuna label was deemed a WTO violation. This week, Reuters is reporting that the WTO has ruled that U.S. beef labels are a WTO no-no.

Corporate meatpackers are rejoicing, saying (according to Reuters)... 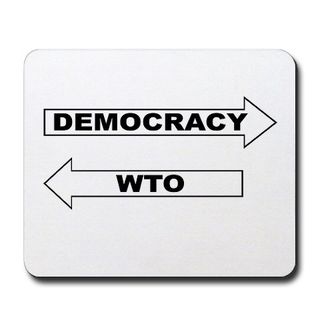 COOL was a bad idea from the start. "This ruling is unfortunate for the U.S. government but the consequences of a poor decision have been revealed. We fully support WTO's preliminary ruling," Bill Donald, president of the National Cattlemen's Beef Association, said in a statement.

WTO interference in these types of labeling schemes are likely to further erode support for so-called "trade" deals. As author Eric Schlosser wrote,

"The days when hamburger meat was ground in the back of a butcher shop, out of scraps from one or two sides of beef, are long gone. Like the multiple sex partners that helped spread the AIDS epidemic, the huge admixture of animals in most American ground beef plants has played a crucial role in spreading E. coli 0157:H7. A single fast food hamburger now contains meat from dozens or even hundreds of different cattle..."

Heck, even free marketeers will be upset with the WTO ruling, since labeling transparency allows the consumer to make the free choice as to what kind of product they want to buy without the government dictating the outcome.

Unfortunately, rather than fixing the WTO mess we've got, the Obama administration is working to expand these types of consumer-harming rules through not one, not two, but three additional unfair trade agreements. Indeed, President Obama is pushing a package of three NAFTA-style deals with Korea, Colombia and Panama that replicate and expand on the WTO threats to food safety.

What's worse, they'll allow some food processors with a presence in the U.S. and these countries with new rights to DIRECTLY attack U.S. consumer safety rules. If the investors win, then U.S. taxpayers have to hand over cash compensation to these corporations. Over $350 million in compensation has already been paid out to corporations under these cases. This includes attacks on natural resource policies, environmental protection and health and safety measures, and more. In fact, of the $9.1 billion in pending claims, all relate to environmental, public health and transportation policy – not traditional trade issues.

At a time when food safety and worker safety budgets are being cut, expanding these flawed rules is unconscionable. If you think that Obama should be spending his energy fixing the flawed trade rules already on the books rather than expanding these rules to new countries, say aye here and take action.

How did we get to a place where the WTO was telling us what type of consumer labels we could use? We have more data on the case after the jump...

All the foodies and farmers out there will recall that a major provision of the Food, Conservation and Energy Act of 2008 (also known as the 2007-08 Farm Bill) was the country of origin labeling (COOL) requirements for meat products. The bill was originally vetoed by President Bush, but Congress overrode the veto and it became law on May 22, 2008.The regulations implementing COOL went into effect in 2009.

Section 11002 contained the new COOL rule. It said that beef, lamb, pork, chicken, or goat meat could only be designed as "Made in the USA" if it were "exclusively born, raised, and slaughtered in the United States." If it were not, it would have to be labeled by the country or countries it came from.

Seems pretty sensible, right? If a consumer only wants to eat U.S. meat, they'll have that option. If you're like me, you might also sample some "Made in Argentina" beef. Ay, que rico!

The rules for ground meat products were also strong, saying:

This makes even more sense, given the health risks to eating ground beef from multiple animals - let alone dozens of animals from different countries.

The principal under both of these is that it puts the power in the consumers' hands to decide what they want to eat.

Details about the ruling are confidential, but the WTO's website provides some of the background. We know that the case was launched in December 2008, before the COOL regulations were even fully implemented.

We don't know which specific WTO rules the U.S. was deemed as violating.We do know that the WTO's Agreement on Sanitary and Phytosanitary Measures says that even "sanitary and phytosanitary measures necessary for the protection of human, animal or plant life or health" have to comply with the WTO rules. If the reasoning is at all like that in last week's tuna-dolphin case, the panel probably decided that the U.S. can't institute labeling if doing so might lead consumers to choose against ground beef that comes from a million cows from all over.

Unlike the U.S. Constitution and legal system, the WTO puts maximization of trade volumes first - ahead of consumer safety or the environment. As if corporations needed any more incentive to destroy local food production.

The U.S. will probably appeal the ruling, which will not be made public for a while. But the WTO rules and precedent are now pretty clear that consumers take a back seat to corporate interests.

[UPDATE 5/31/11: Inside U.S. Trade is reporting that the panel ruled that U.S. COOL requirements violated the WTO's Agreeement on Technical Barriers to Trade Articles 2.1 and 2.2 The latter rule requires that even legitimate consumer protection measures not get in the way of maximizing trade volumes. IUT also reports that our own officials have chafed at the very popular COOL requirements: "U.S. government officials have confidentially warned for years that the COOL law, as amended under the 2008 farm bill, would likely be found inconsistent with WTO rules if challenged."]

This is really outrageous. We don't have the right to know where our products came from?

Interesting to see how many countries joined the case against us, while so few will join our cases against China. I guess they know who will retaliate, as opposed to whose bureaucrats "confidentially" warn our own lawmakers about our own laws.

Disgusting all around. We should withdraw from the WTO, and make U.S. laws with our citizens' best interests- not U.S. and foreign corporations- in mind. If anyone else doesn't like it, they can take their trade surplus with us and go home.

The reason why our food is contaminated is because of the conditions these animals are. It's also what the animals are eating that is leading them to get sick and make us sick. These animals need to be antibiotics or else they get very ill. If they would feed these animals grass. They wouldn't need to use these drugs.