President Obama came under fire from progressives earlier this year who felt he did not do enough to support the working families in Wisconsin and throughout the Midwest who have been fighting to preserve their collective bargaining rights from attacks by anti-worker governors like Scott Walker.

Now, the administration has gone a step further and is touting Scott Walker's support for a package of three NAFTA-style trade deals that are projected to offshore American jobs. The letter also calls for reinstatement of Fast Track, the undemocratic mechanism invented by Richard Nixon to ram trade deals through Congress that expired in 2007 and that Obama campaigned against as a candidate.

Most governors did not sign onto this latest NAFTA push. But 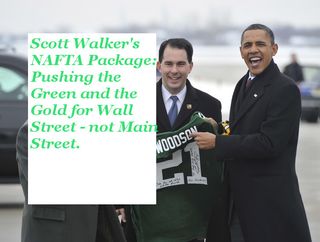 major anti-union Republican governors including Walker and Indiana's Mitch Daniels are on the letter. (See whether your governor signed on or not after the jump.)

It's one thing to backtrack on the fair-trade campaign commitments you made to your political base, adopt Bush's trade policies as your own, and refuse to go out of your way to fully support your political base in state level politics. It's quite another to actively partner with governors that want to destroy your political base on an agenda the American people despise.

Click here to take action and urge your member of Congress to vote down Scott Walker's NAFTA trade package.

See the full list of signatories after the jump.

These two officials of non-states also signed the letter:

These four officials of non-state did not sign on:

(Parenthetically, I would also note that a key claim made in the letter - that FTAs help exports - is completely belied by the facts. As we've shown in the past, export growth to FTA countries lags far behind that to non-FTA countries.)