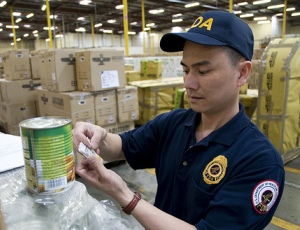 We have yet more bad news on the food safety front. Two weeks ago, news came that U.S. consumers would be barred from knowing if the tuna they're eating was caught using methods potentially fatal to dolphins. Last week we found out that the WTO would prevent country-of-origin labeling on beef from foreign countries sold in the U.S. Now comes word that the meager FDA inspections of foreign food facilities that have given U.S. consumers a modicum of protection against dangerous food will likely be rolled back.

Inside U.S. Trade reports today that proposed cuts to the FDA's 2012 budget could cripple the FDA's ability to conduct food safety inspections at foreign facilities that export food to the United States, according to a leaked FDA document.

The new proposal, contained in a bill approved by the House Appropriations Committee, would fund the FDA's food programs in 2012 at only 90 percent of their 2011 levels, and at only 79 percent of the level requested by the Obama administration to ensure full implementation of foreign food facilities inspections. The FDA is supposed to conduct at least 600 inspections of foreign facilities in 2011, but it will likely have to conduct much fewer next year if the proposed cuts become a reality.

This week, Food and Water Watch released a report examining the threat that uninspected Chinese food imports pose to U.S. consumers' safety. Since China entered the WTO in 2001, the volume of imports of Chinese food into the United States by tonnage has increased by almost 200%, and the share of Chinese imports as a proportion of food consumed in the U.S. has skyrocketed for some key products, reaching 70 percent for apple juice, 43 percent for processed mushrooms, and 78 percent of tilapia. During the same period, several food safety scandals erupted in China, sickening hundreds of thousands of people there and killing thousands of pets in the United States. Nevertheless, between June 2009 and June 2010 the FDA conducted only 13 food inspections in China.

The bill slashing the FDA’s foreign inspections budget is expected to be voted on in the House next week. Given the repeated food safety incidents in China and now news of the tragic deaths in the E. coli contamination case in Germany, the need to fully fund increased food inspections at foreign facilities has never been clearer.

Absolutely insane. We grew up reading in school about the horrors that happened in this country before food and drug inspection.

Now, we have opened our borders to food from China, and we are going to cut back on inspecting it.