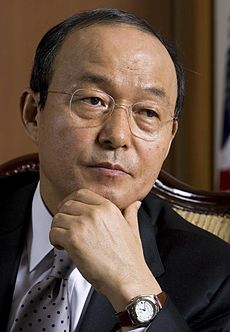 As the fight against the Korea, Colombia, and Panama FTAs heats up with the AFL-CIO and the Chamber of Commerce launching dueling media campaigns, the Korea FTA fight on the other side of the Pacific continues to simmer.

The Korean National Assembly has not yet ratified the Korea FTA, and both the U.S. and Korea must approve the pact for it to go into effect. Although the pro-FTA Grand National Party currently has a majority in the Korean National Assembly, lawmakers are reluctant to bring such a controversial issue to a vote before their national elections in April for fear of provoking voters' ire. A pro-FTA legislator acknowledged that "It could already be too late" for the vote to occur before April. If they wait until after April to hold a vote, they may never get a chance, at least with the FTA in its current form, as the main Korean opposition party, the Democratic Party, opposes the FTA and could retake the majority in the National Assembly.

In an interview with the Wall Street Journal, senior Democratic Party lawmaker Song Min-soon discussed his party's opposition to the FTA. He zeroed in on the need to eliminate the strict provisions of the FTA that prohibit Korea (and the United States) from implementing a range of prudential financial services regulations, including capital controls:

[Mr. Song] says that South Korea should try to change the financial services portion of the pact to ensure that, should another financial crisis spur an outflow of capital as happened in 2008, Seoul has a full arsenal of measures to counter-act the effects.

As it stands now, Mr. Song says, the FTA may put some practical limits on measures South Korea may want to use to prevent an outflow of capital and a related weakening of the Korean won. To be sure, he says, it’s a fine line because the FTA does not “theoretically” stop South Korea from doing what it needs to do to protect the won. “But practically, it’s almost prevented,” he says.

Mr. Song has good reason to be worried about the Korea FTA tying his government's hand when it comes to regulating the flow of capital into and out of the country. He lived through the 1997 Asian financial crisis, which was precipitated by the uncontrolled flow of "hot money" into and out of national economies. Indeed, Asian countries that chose to implement capital controls faired better in the crisis than countries that stuck to complete financial liberalization. The threat to the stability of both the U.S. and Korean economies is yet one reason why Congress should reject the Korea FTA if and when the Obama administration submits it for approval.

For a detailed discussion of how the Korea FTA bans many types of financial sector regulations, check out our talking points on the subject.