Bulldozing Democracy One FTA at a Time

The vicious murder of university student and environmental activist Juan Francisco Duran Ayala earlier this month has stunned community members in the Cabanas region of El Salvador and beyond. Ayala is the fourth anti-mining activist from the Cabanas region to be killed in the past two years as growing community opposition to gold mining projects has been met with violence. Community groups, international NGOs and political leaders are calling for a thorough investigation into the material and intellectual authors of these murders. 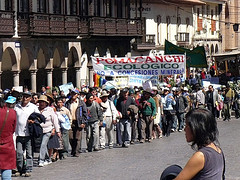 America - from Peru to Mexico - regarding oil, mineral and gas extraction projects and their effects on the local environment.

And in recent years, many of these companies have gained new powerful foreign investor rights via so-called "free trade agreements" (FTAs) and bilateral investment treaties (BITs) that allow them to legally bulldoze through local community opposition and even to shape environmental policies in order to make sure their projects move forward. There are approximately 32 such investor cases launched by extractive industry
companies pending before the International Centre for Settlment of Disputes (ICSID) for hundreds of millions of dollars.

Over the weekend, the New York Times published a top story on this exploitation as it unfolds in El Salvador. As local and nation-wide opposition to precious-metals mining began to gain momentum in 2009, Canadian mining company  Pacific Rim Mining Corp. launched a case against El Salvador under the Central American Free Trade Agreement through a U.S. subsidiary.

The company is using CAFTA to challenge El Salvador's environmental policies and is seeking over $100 million in damages for allegedly not being given the green light to begin operating its "El Dorado" mine in the Cabanas region (the Salvadoran government argues the company did not complete the permitting process). The case is currently being heard before a World Bank tribunal in Washington, DC.

Although investment cases like these represent one of the most alarming institutional shifts in power between the public and corporations in decades (if not generations), the NYT, to our knowledge, has only written a total of three articles that explore the issue in any depth (including the one referenced above and here and here).

Hopefully in the weeks leading up to Congressional votes on new FTAs which will empower thousands of  companies with rights to seek compensation for state and federal policies in the U.S., Korea, Colombia and Panama, the NYT and other media outlets will delve more deeply into how these investor rights are already playing out in communities across the Americas.