Check out this HuffPo piece about the Panama trade deal from MSNBC's own Dylan Ratigan:

"If you want to know why politicians are so eager to pass a free trade agreement with Panama this month, type "Panama offshore banks" into Google and look at the paid ads. What you'll see is advertising by law firms and banks that will offer you help to set up a secret corporate structure in Panama immune from taxes.

The Panamanian "incorporation regime ensures secrecy, avoids taxes,and shields assets from the enforcement of legal judgments. Along with its sophisticated banking services, Panama remains an environment conducive to laundering the proceeds from criminal activity and creates a vulnerability to terrorist financing."

It's time for the second installment of Trade-ifact: Keeping the Media Honest about Trade Deals. Since our last installment, FTA proponents in the administration and Congress have worked to move along the negotiations for curtailing Trade Adjustment Assistance (TAA), all while maintaining a straight face when claiming that these trade pacts will create jobs. Late yesterday, White House Chief of Staff Bill Daley said that they would submit the FTAs for Congressional approval within days, so next week expect the FTA debate to turn white-hot (and a wave of questionable claims to reach tidal wave heights).

Palmer writes, "A year ago, Obama moved to resolve Democratic concerns with the deals." Democratic concerns with the three FTAs remain unresolved. Despite small tweaks to the auto provisions in the Korea FTA, imports of Korean autos are still projected to slam U.S. autoworkers. Plus, nothing was done to address the Korea FTA's prohibitions on certain vital financial sector regulations. Murders of labor union leaders in Colombia continue, and many Democrats are vowing to oppose the Colombia FTA as a result. Finally, Panama's status as a tax haven will remain unchanged if the Panama FTA is approved. The FTA's investor-state provisions would even allow the Panamanian government and corporations to challenge U.S. policies targeting tax havens. Overall, there has been no fundamental change to the NAFTA trade model that Obama promised while he was a presidential candidate.

Palmer claims that Fast Track trade negotiating authority "has long been considered vital for securing trade deals with U.S. trading partners worried that without it their agreements could be picked apart by Congress."  As noted in our book on the history of Fast Track, scores of trade agreements have passed Congress without Fast Track protection, including 130 trade and investment agreements under the Clinton administration alone (Clinton lacked Fast Track authority from 1995 to the end of his second term). In 2000, former Clinton U.S. Trade Representative went as far as to say, "if you look at our record on trade since 1995, I don't think the lack of Fast Track impeded our ability to achieve our major trade goals."

Palmer says that Obama demands an "extension" of TAA be approved along with the three FTAs. The Obama administration's proposal on TAA is actually to narrow eligibility and cut benefits. As Inside U.S. Trade reports, under the new TAA plan workers displaced by trade could receive a maximum of 130 weeks of income support while undergoing retraining, while currently workers can receive up to 153 weeks of income support. It also would restrict income support eligibility for workers who are not in retraining programs, cutting the types of waivers for income support from six to three. Chairman of the House Ways and Means Committee, Republican Rep. Dave Camp, said of the deal, "The final result is a program that has been cut not only from 2009 levels, but also below 2002 levels in several key areas." The "2009 levels" are the elements of the TAA program that expired earlier this year, while the 2002 levels are the elements that are currently in effect. The cuts are a burden on displaced workers when they can least afford it.

As Washington debates the NAFTA-style deal with Panama, Wikileaks has released a treasure trove of damning documents about the current Panamanian administration.

One of the major talking points that the trade deal's proponents utilize is that we must pass the trade deal to reward a key friend in the region. (See here and here.)

But with friends like Panamanian President Martinelli, who needs enemies?

In January 2009, the Embassy expressed concern that Panama's authorities supposedly in charge of providing the U.S. with intelligence "failed to provide" information about drug-related money laundering "to the Attorney General as required by law. Ambassador stressed that the credibility and efficacy of the UAF were crucial in fight against money laundering."

It gets worse. The man behind the money - David Murcia Guzman - has links to former Colombian president Alvaro Uribe, and current Panamanian president Ricardo Martinelli. According to this cable from March 2009, Martinelli's network of Super 99 stores may have been a "service provider" to Guzman, and may have laundered illicit proceeds.

The Embassy wrote, "This scandal is a huge black eye for Panama, and could do serious damage to its international reputation as a safe place to do business. And the worst is far from over." 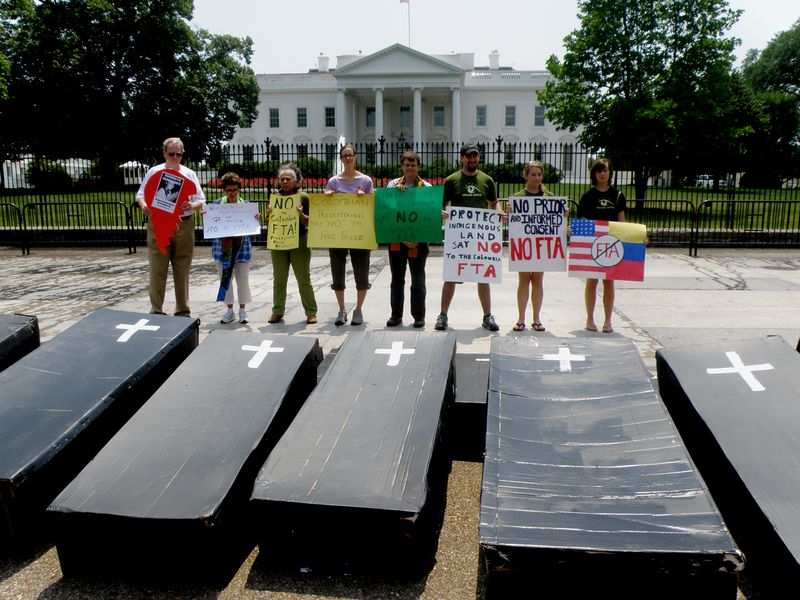 Today, hundreds of activists gathered at the White House for a demonstration against the U.S.-Colombia FTA. These representatives of faith, labor, human rights and consumer organizations called for the Obama administration to drop its push to pass the Bush-signed trade pact. Fifty one coffins were laid in front of the White House to symbolize the murders of that number of Colombian unionists last year. Five activists were arrested as an act of civil disobedience, including Rick Chase, Executive Director of the Presbyterian Peace Fellowship.

Read the press advisory after the break.

Launch of Trade-ifact: Keeping the Media Honest about Trade Deals

Now that the House Ways & Means Committee and the Senate Finance Committee have held mock markups of the Korea, Colombia, and Panama FTAs, we could see votes on the FTAs very soon. One of the major unknowns at this point is whether trade adjustment assistance (TAA, or aid to trade-displaced workers) will be included in the implementing legislation for one of the FTAs. Earlier in the debate, President Obama appeared to have secured an agreement from Republicans to allow TAA to move forward – now, things seem less sure.

Now, more than ever, it’s important that Congress and the public be well informed about the likely impact of these deals, which are modeled on NAFTA.

Unfortunately, there has been too little reporting on the deals, and even less that is accurate and balanced. In the interests of accurate reporting, we're launching a new feature on the blog: Trade-ifact. (Think Politifact, but for Trade.)

We will highlight instances where reporters have gotten the facts wrong on the FTAs, starting with a roundup of the reporting of the last two weeks. We'll blog periodically about this accuracy-in-FTA-reporting issue as more FTA stories with errors are published.

The main factual errors that we have found time and again are:
- Misquoting export projections and quoting export  and jobs projections without a discussion of the likely import increases and job losses. This is like looking at your family’s budget, but only looking at your paycheck, and not what you owe. Like too many of our households, our nation buys more than it makes, resulting in a massive trade deficit. Reporters should be getting this right, and examining the likely impact of our trade policy on the deficit.

President Obama has decided to introduce NAFTA-style deals with Panama, Colombia and Korea to Congress, bowing to pressure from corporations and Republicans.

Recognizing that the deals would cost jobs, the administration also agreed with House Republicans to cut (but partially renew) trade adjustment assistance (TAA) for workers displaced by trade.

Republicans, after getting what they want, are now threatening to block or muddle the push on the FTAs, because TAA was not cut enough, or out of concerns that pairing TAA with the FTAs backs up the notion that trade deals cost jobs. Well, yes.

The three deals will be considered under Fast Track trade promotion authority, which means that normal congressional procedures and debate are suspended. As we state in our book on the topic:

Today, we will attempting to live-blog the simultaneous mock markups in the Senate Finance and House Ways & Means Committees. I'll be focusing on the latter. [My comments will be in brackets; unless noted by quotes, all notes are paraphrased from actual statements.]

Chairman Dave Camp (R-Mich.): We obtained significant reductions in TAA. But the agreement was on substance, not process.

[See statement here. Camp has a key misrepresentation in his opening statement:

"The three trade agreements are a sure-fire way to create American jobs by growing U.S. exports of goods and services – and they do not require one dime of new government spending.  The independent U.S. International Trade Commission estimates that the three pending trade agreements together would increase U.S. exports by at least $13 billion.  These agreements will create and support jobs here in the United States – 250,000 jobs, using the President’s own measure."

This is a serious misrepresentation. In fact, consistent use of this methodology here would show a job loss from the trade deals, not a job gain.

And it's misleading to suggest that these deals don't cost money. In fact, as the Congressional Budget Office estimates have shown, the U.S. government will lose billions in tariff revenue from implementing the deals.

Ranking Member Sander Levin (D-Mich.): Urging a "no" vote on mock markup of the 3 FTAs if his amendment to include TAA is not included. Is asking for a certification to be required that Colombia has met its action plan requirements before the agreement enters into force. Urging a no vote if this amendment to require certification fails.

[This Action Plan fails to accomplish the most important labor rights objective: requiring an end to unionist killings on the ground. It also falls far short of the extensive benchmarks laid out by Democratic labor rights leaders.]