Wallach and Tucker in American Prospect: Parties realign on flawed trade deals
Benefits from WTO Doha Round are a MIRAGE

NAFTA is the One Ring of our Democracy

A prominent narrative is that EPI has grown to prominence for its analysis of the factors driving inequality, including trade policy. As Pearlstein writes:

While EPI and its labor allies have clearly lost the policy battle over free trade, economists have finally come around to its view that trade has had a significant role in widening the U.S. income gap. Even the Institute of International Economics acknowledges that some of the $1 trillion in benefits the U.S. economy gets every year from trade should be used to help the millions of workers who are hurt by trade.

Krugman chimes in on this point:

Since Pearlstein makes a point of mentioning some ancient disputes I had with EPI, I guess I should say something about where all that stands. The main thing, I think, is that trade policy — where I still have some differences with EPI — is much more peripheral an issue than it seemed to be in the early 1990s. I once had a conversation with Bob Kuttner in which we agreed that while we were arguing about NAFTA, Sauron was gathering his forces in Mordor.

If the point is that NAFTA and similar deals are not the only cause of rising inequality, I couldn't agree more. But that's actually the wrong question to be asking. The main raison d'etre of NAFTA-style deals is to set in place a body of rules that become the "new normal" in domestic regulation and international law. As Lori Wallach and I write in a piece published in the American Prospect yesterday:

Since NAFTA, trade agreements have grown to encompass thousands of pages of text, and only a minority of the provisions deal with tariffs—trade policy’s historic remit. Today’s so-called “trade” deals set constraints on how governments can regulate inside their own borders. For instance, the recent pacts ban "Buy America" policies that ensure tax dollars are used to purchase American-made goods and allow corporations to challenge environmental policies for cash compensation. They include such severe limits on financial regulation that the financial services industry celebrated the Korea deal in particular as “the best financial services chapter negotiated in a free trade agreement to date,” according to Citigroup.

These constraints on domestic regulation have a corrosive effect on democracy, and begin to shift the center of political gravity away from elected officials and towards unelected global bodies and corporations. Over time (and we see this every day on Capitol Hill), policy proposals are watered down in order to avoid conflicts with our trade agreements.

Krugman and Kuttner are right that NAFTA is not to the labor market as Sauron is to Mordor. Rather, NAFTA and the WTO are to our democracy what the One Ring is to Mordor. Sauron, in this analogy, represents corporations.

As Tolkein fans know, the One Ring was designed by Sauron, and draws whoever bears it back to his 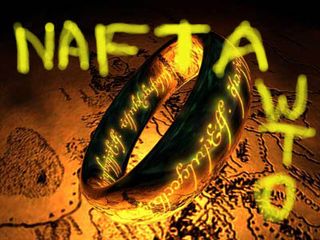 darkness. Its inscription reads: "One ring to rule them all, one ring to find them, One ring to bring them all and in the darkness bind them." The ring represents a set of dark rules that are difficult if not impossible to wield for good, and were designed with Sauron's narrow interests in mind (not all of Mordor's).

Our trade agreements provide the legal and ideological underpinning of neoliberalism. Our government (like Frodo) put these shackles on voluntarily, but now it finds its trajectory negatively influenced by the force. It is of course difficult to hypothesize whether neoliberalism would be destroyed if we got rid of NAFTA-style deals or the WTO. But the system's proponents would have to justify their corporate goals on some basis other than "it's the law."

Krugman is still wrong about NAFTA. These FTAs, along with our membership in the WTO, do have a major effect on our labor markets. They don't have to be the only thing to be a major thing.

We are saying to American workers in many industries- if you can't make this as cheaply as someone in Mexico or China can, tough... even if the demand for the product will come from the United States. And then, because China manipulates the yuan (and other countries- including Korea- play similar games with their own currencies), it's not just some industries affected while others do well- the foreign governments ensure a large trade surplus with us, meaning many industries are affected.

Your example of Buy America is an excellent one. It's a great way of making sure that U.S. stimulus programs flow to U.S. workers who will be paid well for their work. Of course that could have a positive effect on U.S. labor markets... to have a progressive tax on the rich used to fund Buy America purchases. But our leaders are all too interested in kissing up to the Chamber of Commerce and foreign leaders (including Canadian and European) than defending U.S. labor and telling those jerks to go pound sand.