After the trade deal with Korea was approved in Congress in mid-October, I received a message from one of our close Korean activists and member of the Korean Alliance against the KorUS FTA (KOA). He wrote: Now, it is our turn.

Grassroots activists, civil-society groups, and labor unions (all members of KOA) along with students, OccupySeoul, and dissenting politicians have lived up to their rhetoric. Against all odds, they have successfully delayed the vote on the trade deal using an array of political tactics and civil disobedience. 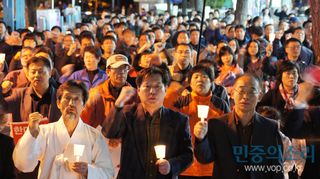 Last week, opposition National Assembly members from the Democratic Party and Democratic Labor Party occupied the hearing room of the foreign affairs committee, which must make a preliminary vote on the trade pact before it is voted on by National Assembly. In occupying the room, they prevented the committee from voting—sending a clear message of defiance to Korea’s ruling party and key FTA supporters.

On the ground, the Korean Alliance, students, and Occupiers have been holding mass demonstrations and daily candlelight vigils in the streets of Seoul. Several times they have marched in protest and have been confronted by police (see more pictures and videos here). 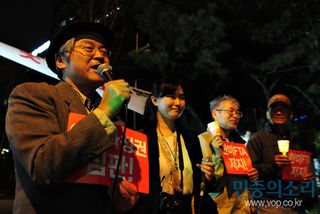 On November 10th, a disturbing observation from KOA was sent to us, reporting, “At the protest held today near the National Assembly building, the policemen turned a water-cannon to shoot protesters. This caused one of the protester's eardrums to rupture. And 11 were arrested.” (See video here.) One of the protesters arrested is a member of the Korean Confederation of Trade Unions (the equivalent of the AFL-CIO) who visited Washington, DC earlier this year and spoke with members of Congress about the Korea trade deal’s economic impacts on the auto industry.

Although protesters are being confronted by police officials almost on daily basis, the Korean Alliance and other activists will continue to demonstrate. This weekend another mass protest will take place as plans for an international day of solidarity are currently in the works with Occupiers and other groups in the US.

These protests are wonderful as a slap in the face of all the U.S. free traders who insisted we needed this agreement to keep our influence in Korea.

It would also be welcome to have U.S. and Korean civil society groups working together against these agreements.

However, if we in the U.S. ever did have a sane trade policy with Korea, it would make a lot of Koreans angry. They have been living off their auto and ship trde surpluses with us for a long time, and we should stop it now (as we should have stopped it long ago). As we have seen, many countries seem to think they have a right to run a trade surplus with us, and throw a hypocritical hissy fit whenever there is discussion here of fixing that problem.