Today's release of new trade data for October revealed more of the same under the Korea FTA: lower exports, higher imports, and a deeper U.S. trade deficit with Korea.  We've reported similar trends in past months here, here, and here.

In comparison with the FTA-free month of October 2011 (after adjusting for inflation), this FTA-encumbered October saw 3% fewer exports to Korea, 3.4% more imports from Korea, and a 20.4% jump in the U.S.-Korea trade deficit.   For the full seven months since the FTA's implementation for which data is available, exports have fallen 7.5%, imports have risen 0.4%, and the deficit has widened 23.3% in comparison to 2011 levels.  That's bad news for U.S. job creation--the promise under which the Obama administration sold this NAFTA-style deal.

The falling exports are particularly disconcerting.  While, the U.S. has yawning trade deficits with many countries, exports to those countries tend to still rise, though overshadowed by even larger increases in imports.  Under the Korea FTA, exports have actually been falling in real terms in comparison to 2011.  Indeed, most of the deepening deficit under the FTA can be explained by reduced exports rather than increased imports.

For a depiction of this job-erasing reality, see the graph below, which portrays the difference in inflation-adjusted export levels, import levels, and overall trade balance when comparing the FTA months of 2012 with the same FTA-less months of 2011.  This year's overall more negative trade balance (i.e. deeper deficit), represented by the green area, owes largely to the fact that exports, represented by the red line, have remained consistently lower (with the tiny exception of June) under the FTA.

The US Trade Representative under Obama sold the Korea FTA with the slogan "More Exports. More Jobs."  I wonder how they'd sell this graph. 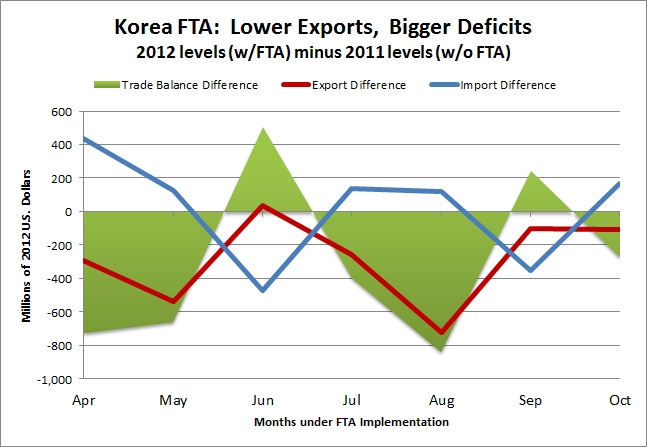 as Connie implied I'm in sh ock that any one can profit $8949 in a few weeks on the computer. did you look at this website wow92.COM