Home Archives Subscribe Back to TradeWatch.org
Live from Auckland: Lori Wallach Interviewed at TPP Negotiations on Dangers of the Deal
U.S. Exports to Korea Suffer under FTA

Mexican Unions Say No to "Free Trade" Expansion Through the TPP 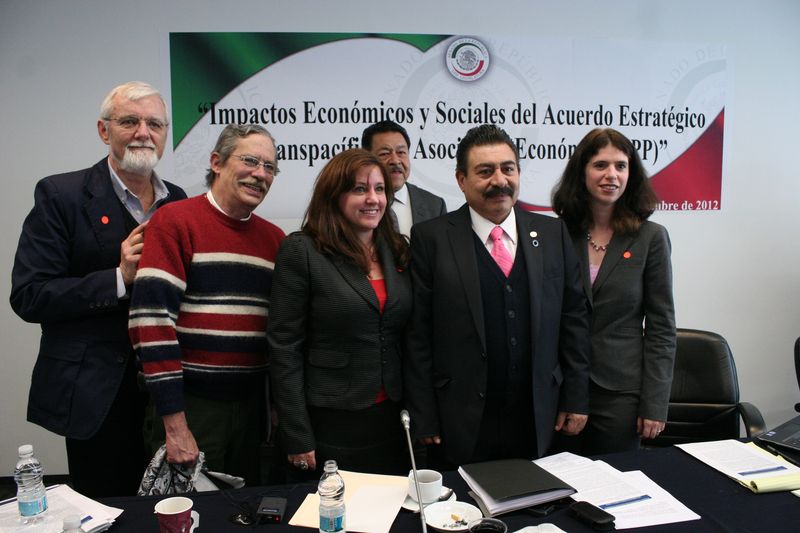 Above: Celeste Drake (AFL-CIO) and Melinda St. Louis (GTW) pose with representatives from Mexican unions and civil society organizations at a seminar on the dangers of the TPP in Mexico City, Mexico.

Last week, Mexico and Canada took part in their first official closed-door negotiations of the Trans-Pacific Partnership (TPP) “free trade” agreement, which the U.S. has been negotiating for the past 2 ½ years with countries in the Asia-Pacific and Latin America. The TPP would expand the North America Free Trade Agreement (NAFTA) model to 11 Pacific Rim countries (and eventually any nation in the Pacific Rim, from China to Russia to Japan, could be included).

The seminar launched a regional political alliance between partners from Canada (Common Frontiers), the United States (AFL-CIO and Public Citizen), and Mexico (the organizations listed above and others). Senators Fidel Demedicis Hidalgo and Isidro Pedraza Chavez also participated in the seminar and expressed concern about the lack of transparency in the TPP process. The organizers presented this statement to the Mexican press at the end of the seminar (translated below).

Two decades of “Free Trade” is enough: Say No to Expansion through the Trans-Pacific Partnership (TPP)
Statement of UNT, CONORP and RMALC of Mexico
November 14, 2012

"According to the United States government, big business and the Mexican Ministry of Economy, the TPP is the most ambitious free trade agreement that has ever been proposed in terms of the extent of issues it aims to address, but what the enthusiastic promoters of the trade agreement are hiding is that the true intention is to deepen and complete the commitment made by our country in NAFTA and other free trade agreements signed with various countries.

Through TPP the sectors and powers that have benefited from the previous generation of trade agreements will be strengthened and even larger swaths of our economy will be at the disposal of transnational corporate monopolies. This is the trend of the new era of trade liberalization in the 21st century.

The 2008 global crisis, the negative effects of which are still being felt in many parts of the world, began in part as a result of a lack of regulation of the powerful speculative financial sector. Instead of engaging in a crucial shift in direction of the management of our economy to solve this and other problems such as global food scarcity, the environmental crisis, the cultural crisis, or the energy crisis, international financial institutions insist on maintaining a model of globalization designed according to the needs of big corporations, dragging Mexico and other countries to the cliff of savage capitalism.

To do this, these institutions count on the eager cooperation of our own government who, despite the proven failure of the strategy of liberalization through NAFTA in terms of development and social welfare (Mexico is the country that has grown the least in all of Latin America- the average annual growth in GDP per capita during the last thirty years has only been 0.57%, millions of Mexicans have been forced to emigrate, its food dependency increased, etc.), continues to assert that the only way to combat the stagnation of the global economy is to apply a new dose of the same neoliberal medicine, but now with an even more aggressive version than the trade agreements of the 20th century.

We are extremely worried at the lack of transparency with which these discussions have been conducted and the requirements that were placed on Mexico and Canada that forces them to negotiate under disadvantageous and inferior conditions, given that according to the assertions of organizations like the National Association of Manufacturers (NAM), Mexico will have to automatically accept, without discussion or the opportunity to introduce changes, all of that which has already been agreed in the past by the founding countries, and will also be forced to put on the negotiating table all of the issues that might represent an obstacle for business or investment.

In addition, diverse sectors of big business and governments have expressed in multiple documents their priorities in these negotiations. The following are some of these priorities:

1. – Expand intellectual property rights and perfect the enforcement mechanisms. This includes the option to patent products, biological material, and processes. It intends to protect copyright authors against the vulnerability of the internet and extend the duration of patents.

2. –Broaden the scope of investment from the FTAs and Bilateral Agreements by opening strategic sectors which are currently protected by the constitution. This proposition will strengthen the rights of investors and the mechanisms of international dispute settlement.

3. –Remove technical barriers to trade, such as technical regulations and approval of product sales from one country into the territory of another, such as genetically modified organism and medicines, which implicates the loss of sovereignty in physosanitary regulations. This includes U.S. manufacturers requesting that governments are not able to implement technical methods which will create obstacles to free trade.

In response to this, we demand that the Mexican government openly inform the public about the conditions under which they joined the TPP negotiations. We urge the Senate to demand that the executive branch report in detail the state of the negotiations, assumed commitments and their positions. We are pleased that the Senate is working on a resolution directed at relevant officials to share information with them about this issue.

We demand that the actual draft of the negotiations be made public. The past 14 rounds of negotiations indicate that Mexico will have to adopt the terms already discussed, which is unacceptable. The public and the Senate should know the content of the text of the negotiations. Finally, we demand a process of broad discussion that involves the Senate and includes the option of requesting consultation from society about possible participation of our country in the TPP.

The undersigned organizations demand a serious and informed discussion. We are alerting the public about this new danger and are beginning consultations and processes to develop a joint national and international strategy to fight against it. Today, as the Calderón government is meeting with TPP countries and preparing to participate in the 15th round of negotiations during the month of December, we are calling to organize ourselves democratically to change the direction of our country.

To do this we are creating a fair trade framework that should be based on the following principles, among others:

1. Recognition of the economic and social asymmetries among the different countries involved.

2. Transparency so that the citizens of these nations to know the reach and restrictions of possible trade agreements, which requires mechanisms of consultation and social participation.

3. Promotion of food sovereignty by incentivizing domestic production of nutritional and quality foods, and promoting social and economic sustainable development that respects indigenous and rural communities.

4. Protection of human, social and labor rights which require rules that are as strong as those commercial rights that are currently granted to big corporations through trade. A clear commitment should be established to respect core labor standards outlined in the ILO conventions including all provisions related to the concept of decent work and for the rights of women, youth and other social sectors. All this of course requires a binding mechanism to enforce these rights.

5. The establishment of frameworks for effective regulation of speculative financial capital and the prioritization of the development of productive domestic market sectors of every country.

6. Guaranteed access of services of broad band and Internet for the entire population, combatting in every form overt or covert censorship, and

7. Putting the interests of the people of every nation before those of big corporations to shine a light on this principal and to solve problems such as energy, intellectual property, tariff policies, immigration, and the protection of the environment, as well as protecting the rights of Mother Earth."

* Unión Nacional de Trabajadores (UNT), Consejo Nacional de Organismos Rurales y Pesqueros (CONORP), Red Mexicana de Acción Frente al Libre Comercio (RMALC) / Statement read at the press conference on the TPP seminar that happened in the Senate of the Republic of Mexico on November 14, 2012. The seminar was organized by the PRD political party, the UNT, CONORP and RMALC, with the participation of partners from Canada (Common Frontiers), from the United States, (AFL-CIO and Public Citizen), and other various Mexican organizations which launched a regional political alliance in the fight against the corporate project of the 21st century, the TPP.