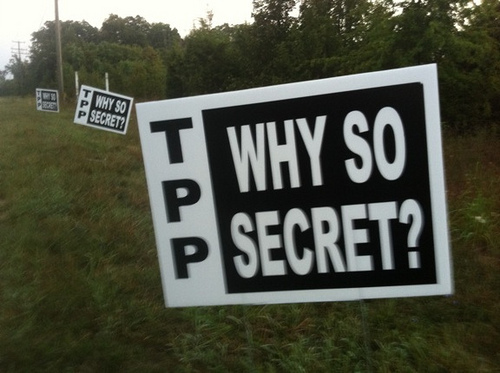 The groups made several clear-cut proposals for increased stakeholder engagement, requesting that a schedule of stakeholder events be published with advance notice, that stakeholders be granted access to the negotiations venue (unlike at the Auckland round, where civil society was shut out), and that stakeholder presentations be scheduled for a time when negotiations are not in session.

The letter also reiterated earlier demands by civil society that the secret TPP negotiating text be made public.  Below is the full text of the letter.

At your most recent briefing with civil society stakeholders on January 10, 2013, you invited civil society organization stakeholders to share with you our desires with respect to stakeholder engagement during the Trans-Pacific Partnership (TPP) negotiating rounds.  We appreciate your willingness to share these requests with the Singapore lead, as well as the rest of the TPP partners who would be hosting upcoming rounds of negotiations.

As U.S. organizations with broad constituencies that will be affected by many aspects of the TPP, we have and will continue to utilize all opportunities to provide input and technical expertise to negotiators.  We believe that such civil society stakeholder engagement with negotiators is critical during the negotiating rounds.  Therefore, we believe that –at a minimum – stakeholder engagement during the TPP negotiating rounds should include the following:

While we believe that facilitating stakeholder engagement in this way is critical as negotiations advance, we respectfully reiterate our earlier demands for negotiating texts to be made public. USTR has engaged in TPP negotiations for nearly three years without any public access to even the most fundamental draft agreement texts or summaries. This stands in contrast to the negotiation of the multi-country Free Trade Area of the Americas, for which a complete draft composite text was publicly released, and to negotiations related to the WTO Doha Round, for which various proposed agreement texts were also made public, as well as multiple other international negotiating fora.

This lack of transparency has severely limited meaningful input by civil society and other stakeholders who have a direct and long-term interest in the outcome of these negotiations. Yet, under the trade advisory system, more than 600 official advisors mainly representing business interests have direct access to at least the U.S. proposals and thus, unlike the public and most of Congress, have a greater ability to directly influence the TPP’s terms. Greater transparency and inclusiveness is essential to such negotiations, particularly as the scope with respect to both the subject matter and the countries potentially involved are expanded. The enforceability and permanence of such binding rules, with later changes to an adopted pact requiring agreement by all signatory countries, necessitates maximal transparency and extreme care during the negotiation phase.

Thank you for your attention and for passing these requests and concerns to your counterparts in other TPP countries.