The U.S. Census Bureau just released 2012 trade data showing yet another year of massive U.S. trade deficits. You will not find two critical pieces to the 2012 trade story in the release or the accompanying press reports: the Census data is skewed in a way that inflates U.S. export levels, and even the inflated export figures show that President Obama’s goal of doubling exports is seriously lagging.

The U.S. Census Bureau methodology inflates the value of U.S. exports by counting goods that actually are made overseas – not by U.S. workers. These “re-exports” are goods made elsewhere that are shipped through the United States en route to a final destination. Accurately determining the impact of status quo trade policy on U.S. jobs requires counting only U.S.-made exports, which will be quietly reported by the U.S. International Trade Commission (USITC), probably over the weekend. We will send out the USITC 2012 year end data Monday.

As the graph below shows, since passage of the North American Free Trade Agreement (NAFTA) and similar "free trade" agreements (FTAs), re-exports have increased dramatically, causing an increasing gap between U.S.-made exports and the inflated export numbers reported by the U.S. Census Bureau. As a result, the actual U.S. trade deficit in goods has exceeded the re-exports-skewed trade deficit data to an increasing degree, soaring more than 20 percent above the skewed number for the last three years. In 2011, the actual trade deficit exceeded the distorted trade deficit by nearly $150 billion, a difference that implies an additional one million net U.S. jobs displaced by unbalanced trade, according to a ratio used by the Obama administration. 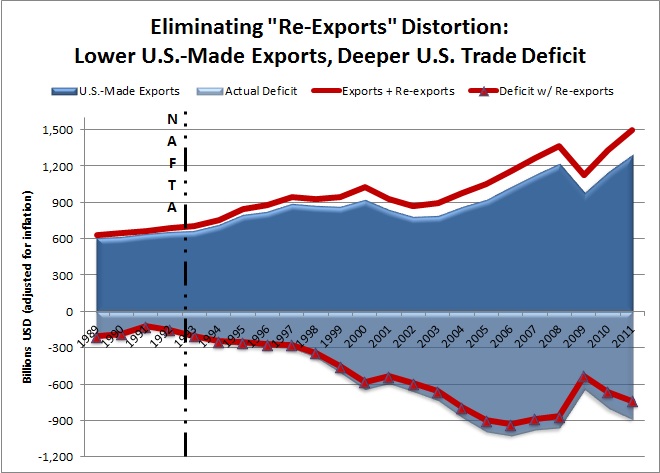 But even with the inflated exports figures, the United States is falling significantly behind the export growth goal set by President Obama, as shown in the graph below. In his 2010 State of the Union address, President Obama set a goal to double exports over the following five years. With two years left, the United States should be 60 percent of the way toward achieving this goal. Instead, the new 2012 exports data, despite being inflated by the inclusion of foreign-made re-exports, shows that we are just 37 percent of the way toward Obama's export growth goal, with U.S. goods exports growing at two-thirds of the promised pace. Though the 2010 export growth spurt came close to promised levels, this rise owed largely to a predictable rebound after U.S. exports plummeted in 2009 amid the global recession. The 2012 data shows far more lackluster export growth. 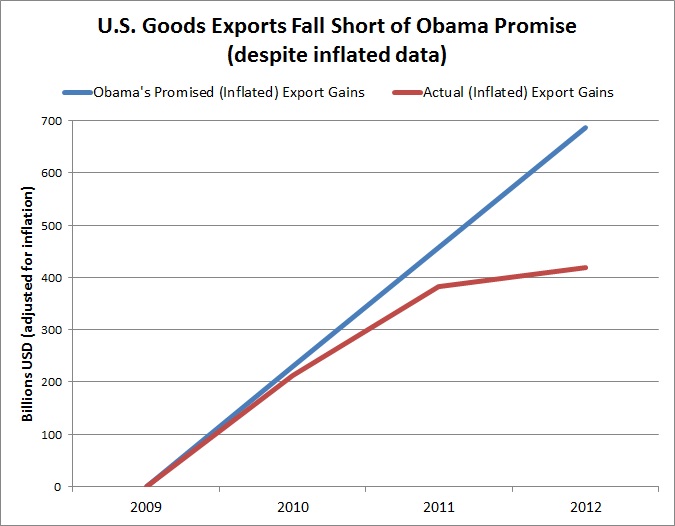 Stay tuned for a press release from us on Monday that will report the more accurate 2012 trade data and what it means for U.S. jobs.