USITC Trade Data Shows Obama Goal of Doubling Exports Is Even More Remote Relative to Census Bureau Data, Due in Part to Falling Exports under FTAs with Korea, Colombia and Panama

The Obama administration’s attempt to tout the decline in the overall U.S. trade deficit for 2012 as a trade policy success diverted from the three most critical trends that the annual data revealed:

Goal of Doubling Exports off Track

In his 2010 State of the Union address, President Obama set a goal to double exports over the following five years. With two years left, the United States should be 60 percent of the way toward achieving this goal. Instead, the 2012 Census data, despite being inflated by the inclusion of foreign-made re-exports, showed that we are just 37 percent of the way toward Obama's export growth goal, with U.S. goods exports growing at less than one-sixth of the promised pace in 2012. The USITC data, reporting only U.S.-made exports, shows that we are even farther from doubling exports and, under the sluggish 2012 export growth rate of two percent, will not achieve the president’s goal until 2032, 18 years behind schedule. The picture would be worse were it not for the 2010 export growth spurt – an anomalous and predictable rebound after U.S. exports plunged in 2009 amid the global recession. 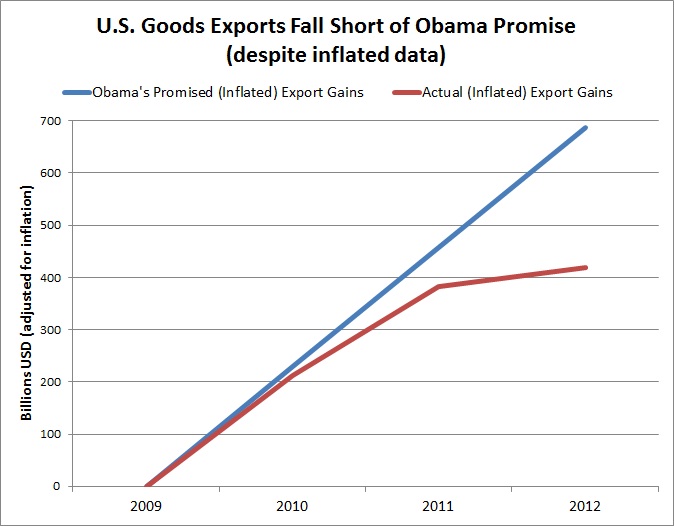 The new USITC data shows that under the FTAs that took effect in 2012 with Korea, Colombia and Panama, combined U.S. exports to the three countries have actually fallen four percent relative to the same months of 2011. U.S. goods exports to Korea declined by 10 percent (more than $3.1 billion) in comparison to 2011 levels for the same months. The U.S. trade deficit with Korea grew 26 percent during this period.

Driving the combined FTA export downfall was the decline in U.S. exports to Korea, by far the largest of the three economies, under the first nine months of the Korea FTA. Despite Obama administration promises that the pact would boost exports, U.S. exports to Korea took a dramatic plunge after the deal took effect in March 2012, and have continued the downward trajectory since. Some of the worst declines were in the sectors the administration touted as prospective “winners” under the agreement. U.S. pork exports to Korea declined 17 percent under the FTA in 2012 relative to the same months in 2011, while beef exports fell 11 percent and poultry exports plunged 40 percent. While U.S. auto exports to Korea have increased four percent under the FTA, U.S. auto imports from Korea have surged 17 percent, causing an 18 percent rise in the U.S. auto trade deficit with Korea. 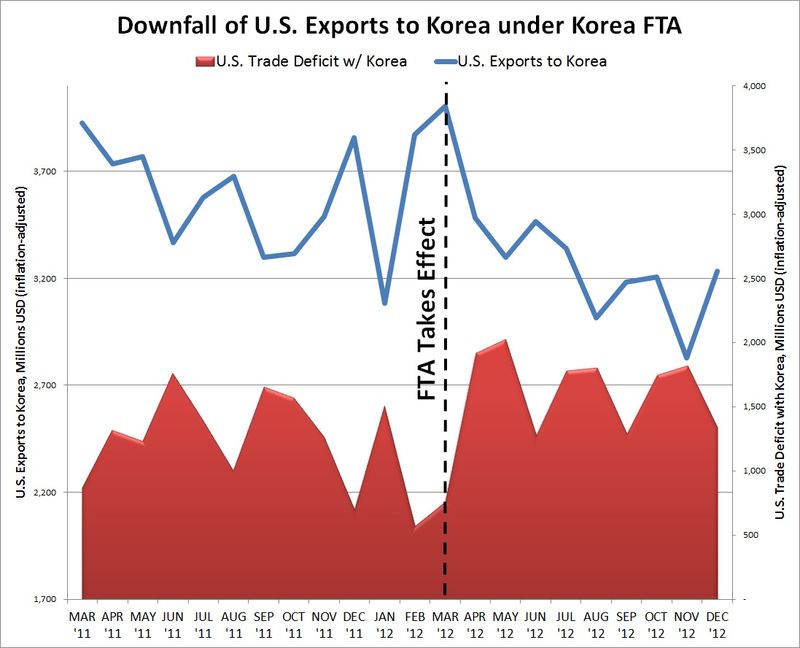 As the chart below shows, the U.S. Census Bureau methodology inflates the value of U.S. exports by counting goods that actually are made overseas – not by U.S. workers. These “re-exports” are goods made elsewhere that are shipped through the United States en route to a final destination. Since passage of NAFTA and similar FTAs, re-exports have increased dramatically, causing a growing gap between U.S.-made exports and the inflated export numbers reported by the U.S. Census Bureau. 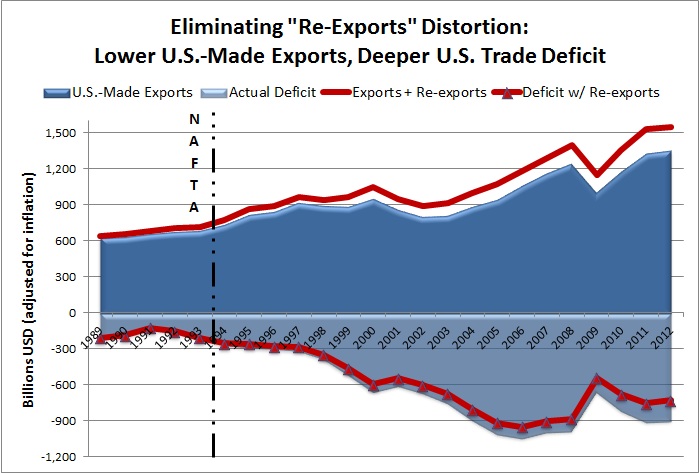