U.S. Trade Deficit with Korea Soars to Highest Point on Record under FTA

The U.S.-Korea trade imbalances of recent months are remarkable not just in comparison with most other U.S. trade partners, but in comparison to how U.S. trade with Korea looked before the Korea FTA took effect in March of last year.  In nine of the ten first months of the FTA's implementation, including the most recent month, U.S. exports to Korea fell below pre-FTA levels (relative to the same months in the prior year), spelling an overall 9% fall in exports under the FTA.  In six of those ten months, including the most recent month, U.S. imports from Korea exceeded pre-FTA levels, yielding a 2% increase in imports under the FTA.  As a result, the U.S. trade deficit with Korea under the FTA's first ten months is 30% -- or $4 billion -- larger than in the same months before the deal took effect.  The graph below summarizes this none-too-pretty picture for U.S. jobs, depicting the difference between Korea trade levels under the FTA (April 2012-January 2013) and those occurring in the same months one year earlier, before the FTA took effect.

As Obama administration trade negotiators meet in Singapore this week to hash out the details of the Trans-Pacific Partnership, a massive expansion of the Korea FTA model, they should take a gander at this data. If the Obama administration hopes to fulfill its promise of a rebirth in U.S. manufacturing, a restoration of middle-class wages, and a recovery of decent jobs, it cannot afford to sign another sweeping FTA that expands upon the Korea FTA's sorry track record. 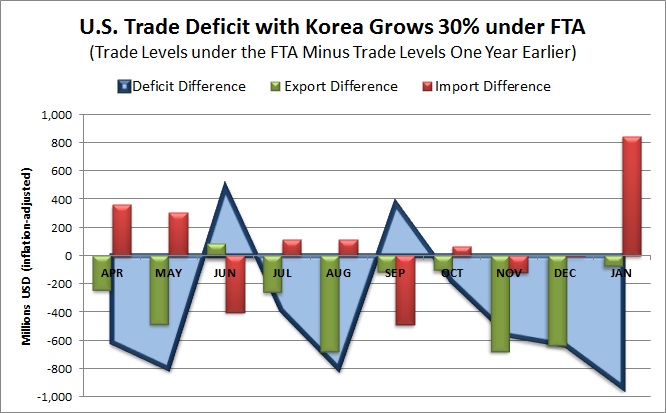 manufacturing, a restoration of middle-class wages, and a recovery of decent jobs, it cannot afford to sign another sweeping FTA that expands upon the Korea FTA's sorry track record.

Hi – I am so delighted I found your blog, I really found you by accident, while I was researching on Digg for something else. Nonetheless I am here now and would just like to thanks for a fantastic post and an all round interesting blog.

While price may affect your choice, since you want an affordable rate, do not just opt for the cheapest choice.

Well surprise surprise the American worker gets shafted once more with another failed fta.Cant wait to hear the right wingers try to explain this trade data from the South Korean fta.But knowing them they will propagandize this data to brainwash the middle class.