Death threats against Colombian union members have remained appallingly high since announcement of the U.S.-Colombia Free Trade Agreement (FTA) Labor Action Plan according to the Escuela Nacional Sindical (ENS), the group recognized in the Plan as an authoritative source of monitoring data. The data shows that unions and congressional labor rights defenders in Colombia and the United States were sadly correct in opposing the Colombia FTA on concerns of continued violence against workers, while the Obama administration’s promises about the Labor Action Plan were incorrect, said Public Citizen on the two-year anniversary of the Plan.

More than a year after the passage of the Colombia FTA and two years after the Obama administration announced a Labor Action Plan with Colombia to improve its labor rights protections, Colombia remains the world’s deadliest place to be a union member. In the year after the launch of the Labor Action Plan, union members in Colombia received 471 death threats – exactly the same number as the average annual level of death threats in the two years before the Plan, according to the ENS data relied upon under the Plan. At least 20 Colombian unionists were assassinated in 2012 according to ENS data, while the International Trade Union Confederation (ITUC) reported 35 assassinations last year. Meanwhile, many perpetrators of the over 2,000 existing cases of unionist murders remain free.

In addition, violent mass displacements of Colombians increased 83 percent in 2012 relative to 2011, when the U.S. Congress passed the FTA, according to the Consultoría para los Derechos Humanos y el Desplazamiento. The 130 mass displacements of 2012 added to the five million Colombians who have been displaced in the world’s largest internal displacement crisis. Recent acts of horrific violence and forced displacement have occurred in venues targeted for development under the FTA, such as the port of Buenaventura, according to the Washington Office on Latin America. 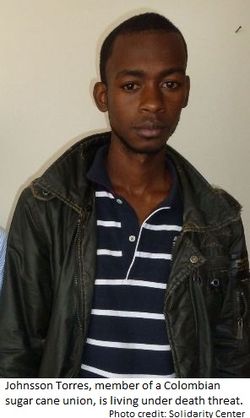 Sadly, Colombian unions and human rights organizations had predicted that the Labor Action Plan would not alter on-the-ground realities. Among the unionists who have received death threats since the FTA went into effect is Jhonsson Torres, a sugar cane worker who came to Washington to plead with members of Congress not to approve the FTA until and unless labor protections improved. One year ago the general secretary of Jhonsson’s union, also under death threat, was shot and killed while walking with his wife.

“Many people were shocked that the Obama administration would push a trade deal with Colombia, given the record of widespread deadly violence against unionists and human rights defenders, some of it perpetrated by the military and most of it occurring with impunity,” said Lori Wallach, director of Public Citizen’s Global Trade Watch. “Now that the Obama administration is responsible for passing this agreement, the question is: what will it do to reverse this horrible trend?”

During his 2008 presidential campaign, then-candidate Obama famously opposed the Colombian FTA, stating in the third debate with Republican nominee Senator John McCain, “we have to stand for human rights and we have to make sure that violence isn’t being perpetrated against workers who are just trying to organize for their rights.”

But in April 2012, as anti-union repression remained rampant in Colombia, President Obama travelled to Cartagena to announce the implementation of the FTA. He stated, “this agreement is a win for our workers and the environment because of the strong protections it has for both – commitments we are going to fulfill.”

“The complete flip-flop from the reform trade agenda President Obama campaigned on in 2008 to the retrograde policies the administration is negotiating today with Latin American and Asian nations reveals the deep influence big business has on determining U.S trade policies that affect wide swaths of non-trade related issues,” said Wallach. “Despite members of Congress, labor unions and human rights groups in Colombia and the United States pointing out to the Obama administration the deficiencies in this Plan and the lunacy of implementing the FTA before real improvement could be measured, the sad reality is a failed promise to fix the horrifying daily reality of Colombian workers.”

It is always disturbing to hear of threats of violence against workers for trying to unionize to protect their rights. Unions can give employees a collective voice and keep management in check, creating more of a balance. Whether it is in the United States or abroad, the rights of employees attempting to organize deserve to be protected.