A report released yesterday by the United Nations Conference on Trade and Development (UNCTAD) reveals that foreign corporations are taking governments to court under the notorious investor-state system at an alarming and increasing rate. In 2012, 62 new investor-state cases were filed - of the known 518 cases to date – which is the highest number of investor-state cases ever filed in a year. In 68% of these cases, it was a developing country whose health, environmental or other public policy was being directly challenged by a foreign firm. The report noted that the firms that have launched investor-state cases to date are predominantly U.S. corporations. These cases are decided by tribunals that sit outside of any domestic legal system, typically comprised of three private sector attorneys. Of the cases publicly decided in 2012, 70% of the victories went to the foreign investor, requiring the government to compensate the firm.

Investor-state arbitrations in 2012 revealed an increasing trend in foreign investors' attacks against states’ nondiscriminatory public interest policies, including changes to domestic regulatory frameworks concerning nuclear energy and currency stability, revocation of mining and oil licenses (often in response to contract violations), and numerous other government measures affecting public health, financial stability, access to essential services and the environment. The UN report concluded that the “trend of investors challenging generally applicable public policies, contradictory decisions issued by tribunals, an increasing number of dissenting opinions, [and] concerns about arbitrators’ potential conflicts of interest all illustrate the problems inherent in the system.” 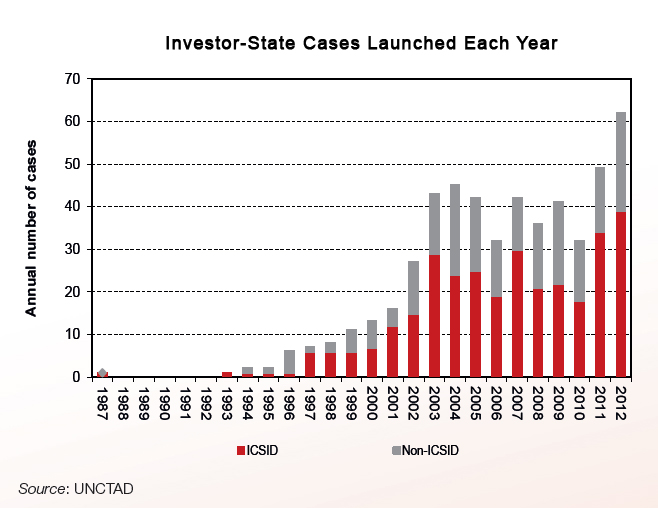 In addition to setting the record for most new cases filed in a year, 2012 also broke the record for the largest ever investor-state "award," the taxpayer-funded penalty that a tribunal orders a government to pay to a foreign investor when the tribunal rules against the government. In Occidental v. Ecuador, the tribunal ordered Ecuador to pay Occidental Petroleum Corporation around 1.8 billion dollars, which rose to more than $2.4 billion with interest and fees -- roughly the government's annual expenditure on health care for half the country. The tribunal ruled against Ecuador for the government's termination of an oil contract that Occidental had violated (which the tribunal acknowledged).  To calculate the historic penalty imposed on Ecuadorian taxpayers, two of the tribunalists used logic described by the third tribunalist as "egregious."

These disturbing trends underlie the growing demands to reform the investor-state dispute system. Upon releasing the report, James Zhan, Director of UNCTAD’s Division on Investment and Enterprise, said that the rise in the investor-state system's "cross-cutting challenges...gives credence to calls for reform of the investment arbitration system.” He noted, “the [investor-state] mechanism is already a source of considered reflection in numerous bilateral and regional [trade and investment] negotiations.”

One of those negotiations is the Trans-Pacific Partnership (TPP), the sweeping NAFTA-style "trade" deal under negotiation between the U.S. and 10 Pacific Rim nations, which, according to the leaked investment chapter, would expand the investor-state system even further. But the "considered reflection" of other TPP countries has made them wary of binding themselves to a system that has delivered a mounting number of costly attacks on the public interest policies of 95 countries. Australia has already refused to sign on to any investor-state provisions. Other countries may follow their lead. In the meantime, global resistance to the extreme investor-state system is growing, with countries like Brazil, India, South Africa, and Ecuador rejecting its threats to democratic policymaking in the public interest. As investor-state cases continue to soar, public and governmental opposition is following suit.