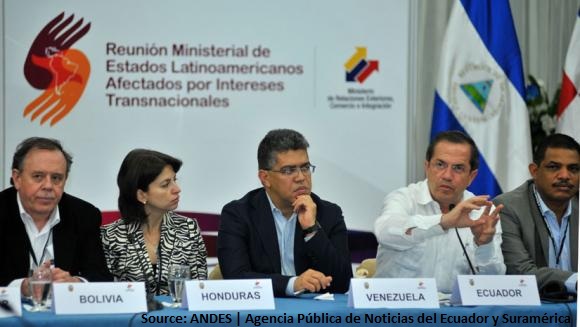 Ecuador, the host of this "Ministerial Conference of Latin American States Affected by Transnational Interests," has taken a particularly hard battering from the investor-state system enshrined in NAFTA-style Free Trade Agreements (FTAs) and Bilateral Investment Treaties (BITs).  The country currently faces a ruling from one tribunal to hand $2.4 billion to Occidental Petroleum after Oxy broke Ecuador's hydrocarbons law, while confronting a ruling from another tribunal that the government should breach its own Constitution and block the enforcement of an $18 billion court ruling against Chevron for massive pollution of the Amazon.  Many of the other countries present have also faced a taxing litany of investor-state cases in recent years: Mexico (e.g. losing $170 million in a NAFTA-created tribunal to the same U.S. agribusinesses that, under the same NAFTA, displaced over two million farmers), Argentina (e.g. losing a slew of cases to foreign financial firms for using financial regulations to mitigate the country's 2001 financial crisis), Guatemala (e.g. losing $13 million to a railroad company that failed to build a railroad because the tribunal thought that the government had failed to fulfill the company's expectations), etc.

These countries have indeed been "affected by transnational interests."  And they are tired of it.

So they put together a conference, officiated by Ecuador's foreign minister Ricardo Patiño, to address the investor-state system that has empowered a multitude of foreign corporations to mount a skyrocketing number of challenges against the public policies of sovereign goernments.  Several civil society organizations from around the world attended to deliver presentations on the dangers of the investor-state system.  I was there on behalf of Public Citizen and summarized the exceptionally broad privileges that unaccountable tribunals have granted to foreign investors in this Wild West frontier of international law, and the equally broad array of public interest policies that have been directly attacked as a result.  Cecilia Olivet of the Transnational Institute detailed the deep conflicts of interest among the private attorneys who alternate between acting as judges in investor-state tribunals and as prosecuting lawyers who bring the cases on behalf of corporations.  Martin Khor of the South Centre explained that while attacks on public interest policies have grown under this investor-state system, foreign investment (the ostensible objective for such an extreme system) has not--study after study has shown no correlation between binding a country's policies to this anomalous regime and attracting foreign direct investment.

At the end of the day, seven of the governments present signed a declaration to coordinate efforts in seeking to replace the investor-state regime with an alternative investment framework that respects sovereignty, democracy, and public wellbeing.  They announced the launch of an International Observatory, a intergovernmental commission based in Latin America to audit investor-state tribunals, draft alternative investment agreements, and collaborate in strategies for reform.  The group will be headed by an executive committee that will help Latin American countries exchange information about emergent investor-state cases and collaborate in mounting defenses against such claims.  Representatives from the remaining five governments participated as observers and are now taking the declaration back to their capitals to discuss joining the emerging Latin American coalition.

By launching this effort, these dozen Latin American countries are joining a mounting effort by governments to halt, renegotiate, or leave the now-notorious investor-state system.  Australia has publicly refused to sign on to the proposed expansion of the extreme regime in the Trans-Pacific Partnership FTA, despite significant U.S. pressure to do so.  India has moved to abolish investor-state dispute clauses in FTAs.  South Africa is re-examining its policy on investor-state disputes and has refused to renew BITs with the EU.  And now Ecuador's National Assembly is considering a bill to terminate its investor-state-embodying BIT with the United States.  Last week's conference adds another dash of momentum to this growing global push to ditch this rather radical regime.

Please send request to Obama administration to send a delegate. Then post and publicize response. Thank You

Good for them. Now if the expected future co-signers of the Trans-Pacific Partnership (TPP) will only get the picture they, and we, will all be spared an enormous loss of liberty.

If allowed, trans-national corporations are obligated to act contrary to the interests of any and every nation, to pollute and trample sovereignty, to exploit workers and violate public well being as long as it increases profits. According to Milton Friedman: http://anamecon.blogspot.com/search/label/Milton%20Friedman
“there is one and only one social responsibility of business–to use it(s) resources and engage in activities designed to increase its profits so long as it stays within the rules of the game, which is to say, engages in open and free competition without deception or fraud.”

Simply, they have no social responsibilities to any society. The caveat, ‘engages in open and free competition without deception of fraud,’ is nonsense, a fob for fools. It is cast aside by corporations at the first opportunity to manipulate competition and the system, and deceive.

Transnational corporations *cannot* be citizens of any nation. They cannot be expected to act in good faith, if by acting in bad faith, if by manipulation of law and system, they can secure greater profits. Corporations are predators, and the citizens and governments of all nations are their prey. Governments of all nations must beware, if they are to secure be blessings of liberty and prosperity for their citizens.

And when transnational corporations make the ‘rules of the game,’ when their lawyers sit in judgment, all bets are off: Anything goes. But you may be sure it will cost you.

Thank Goodness. Now my only fear is that the the good business men and women of the American Transnationals do not lean on their friends in Washington to come down hard on those countries that resist American corporate dominance.