Home Archives Subscribe Back to TradeWatch.org
LIVE FROM LIMA: Our Health, Environment, and Rights are Not Negotiable!
USDA Stands Firm on Consumer Meat Labels, but Will the WTO Continue its Anti-Consumer Legacy and Authorize Trade Sanctions?

RECAP FROM LIMA: Experts, Activists, and Peruvian Members of Congress Rally Against the TPP

As the 17th round of the Trans-Pacific Partnership (TPP) negotiations continue in Lima this week, objections to the proposed sweeping NAFTA-style deal (with 10 Pacific Rim countries) have been heard from a diverse spectrum of voices, including experts, activists, and even a Peruvian Member of Congress.

Last Thursday, a public forum was held in Lima to discuss concerns about the TPP. Advocates and experts, including Global Trade Watch's own Melinda St. Louis, discussed topics ranging from intellectual property and internet freedom, to labor standards and the investment chapter.

One of the most notable speakers was Pablo Fabian Mosau, a representative from La Oroya, the town that has been severely polluted by a metal smelter owned by U.S.-based Renco/Doe Run (considered one of the ten most polluted sites in the world). Renco/Doe Run has launched an $800 million investor-state claim against Peru using the investment privileges enshrined in the U.S.-Peru FTA –- privileges that the TPP aims to expand. Mosau gave an emotional account of the dire situation in his community, where 99.7% of the children suffer from lead contamination, and flowers and trees have died as a result of the pollution.

The audience also heard from Verónika Mendoza, a Peruvian Member of Congress, who expressed concern about a negotiation process that locks out citizen and government participation. She cited investor-state cases such as Renco/Doe Run and Eli Lilly as indicators that Peru needs to take a strong position to protect environmental health in the face of proposed investment privileges and protect access to medicines in the face of proposed monopoly patent expansions. 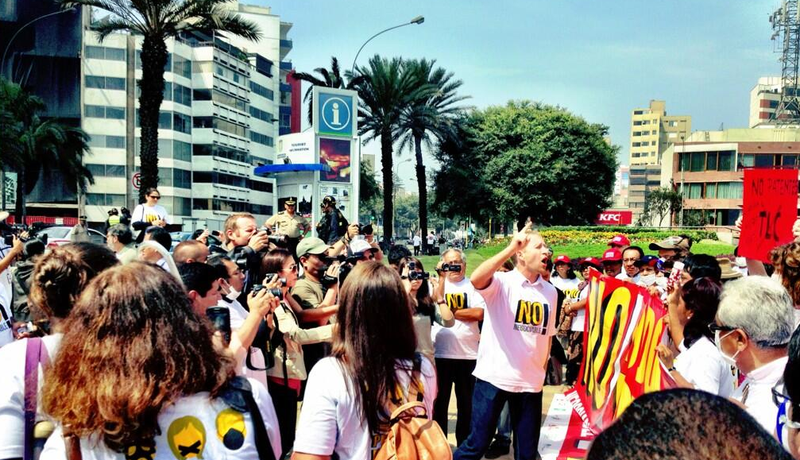 On Friday, activists took to the streets to protest the TPP negotiations. Protestors wore masks to symbolize the danger the TPP poses to access to medicines and health and chanted “No es negociable!” (Not negotiable!). The protest was covered by several prominent Latin American news outlets, including CNN, La Pr1mera,  the Associated Press, and many others. La Mula posted a video of the protest. 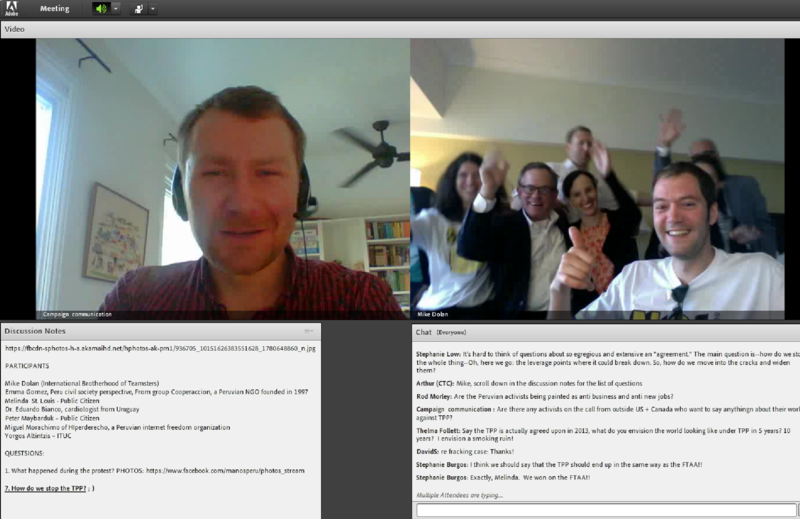 After the protest, advocates organizing around the TPP negotiations in Lima hosted a webinar to update activists from around the globe and answer questions about the TPP. Click here to check out a video of the webinar if you missed it.

Though the negotiating round in Lima round is coming to an end, many Peruvians -- including the citizens of La Oroya -- still have to live with the damaging effects of the investor privileges embodied in "trade" pacts. Australia has already refused to sign on to such privileges in the TPP.  Hopefully Peru will follow suit. In the meantime, it is crucial that civil society around the globe carry Peruvians' message to their own governments: our right to health, a clean environment, fair labor standards, and internet freedom are not negotiable.

The Trans-Pacific Partnership is nothing more than N.A.F.T.A. on steriods but even worse with it's many inclusions. Why is this being pushed through in secret? This certainly qualifies for the term "Fascism".