April was another record-breaking month for U.S. trade with Korea under the U.S.-Korea Free Trade Agreement (FTA).  The monthly U.S. trade deficit with Korea soared to its highest point in history, topping $2.5 billion for the month of April alone.

The deficit increase owes largely to a dramatic drop in U.S. exports to Korea since enactment of the FTA.  U.S. exports to Korea in April once again fell below the levels seen in any given month in the year before the FTA took effect.  The sorry track record defies the promise (FTA = more exports) that the Obama administration used to pass the FTA.  Undeterred by the facts, today the administration is using the same worn-out promise to sell the Trans-Pacific Partnership. 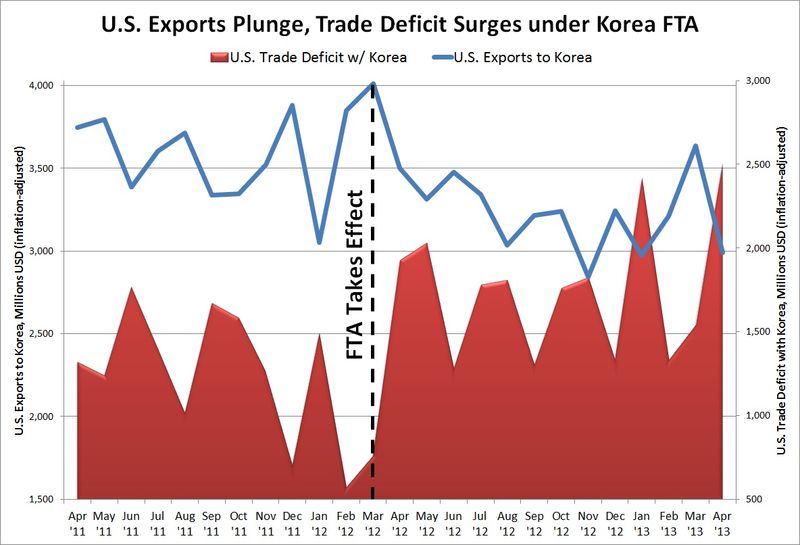 The downfall in U.S. exports to Korea under the FTA has particularly afflicted sectors that, ironically, the administration had singled out as projected winners under the deal -- namely U.S. meat producers.  In April of this year, U.S. beef exports to Korea fell to 43% below the pre-FTA level seen in April 2011, while U.S. pork exports plummeted 66% below the April 2011 level.  In the first full year of FTA implementation, beef exports fell 8%, pork exports dropped 24%, and poultry exports plunged 41% in comparison to the year before the FTA took effect.

For more on how U.S. food exports (and imports) have fared under deals like the Korea FTA, check out our brand new briefing paper: Let them Eat Imports.  The exposé presents new evidence, arguments, and a smorgasbord of graphs to show how lackluster agricultural exports and soaring food imports under FTAs have jeopardized farmers' livelihoods and consumers' safety.