Pressure Pays Off: Obama Administration Finally Lets Congress See Secretive TPP Text (But Still Not the Rest of Us)

For once, we have some good news.  After years of calling for release of the secretive draft text of the Trans-Pacific Partnership (TPP), we have achieved an interim victory.

No, you still can't yet get a look at the sweeping 12-country "free trade" agreement (FTA) that implicates everything from your morning Internet browsing to your evening dinner.  But for the first known time in the three years that the secretive deal has been under negotiation by the Obama administration, said administration has allowed a member of Congress to view three chapters of the bracketed negotiating text.  (In case you're just hearing about this, that's correct: even our elected officials have been kept in the dark on a deal that would rewrite broad swaths of domestic public interest policies.) 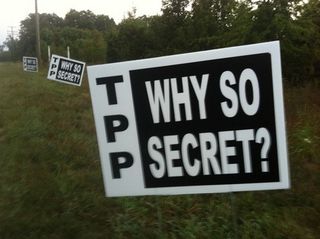 Last week, Congressman Alan Grayson (FL-09) got a peek at the controversial pact after requesting access from the U.S. Trade Representative (USTR).  After similar requests from many members of Congress, including some who received ‘no’ answers from the administration, it appears that Grayson is the FIRST member of Congress to see some of the text.  Upon eyeing the deal, Grayson said, "Having seen what I've seen, I would characterize this as a gross abrogation of American sovereignty.  And I would further characterize it as a punch in the face to the middle class of America.  I think that's fair to say from what I've seen so far.  But I'm not allowed to tell you why!"

The change in the Obama administration's transparency-defying lockdown of the TPP text comes after a wave of high-profile pressure on the administration to release the text.  Last year produced a steady drumbeat of congressional calls for TPP transparency, including a letter from 132 members of Congress to USTR that protested the "needless secrecy" of the deal.  In September, an online petition calling for a "transparent and accountable" TPP process garnered more than 700,000 signatures. This year began with a letter from over 400 diverse civil society organizations that indicted the continued secrecy as "not consistent with democratic principles."

This month, the drumbeat crescendoed.  On June 2, the New York Times published our "Obama's Covert Trade Deal" op-ed that concluded, "the secrecy of the Trans-Pacific Partnership process represents a huge assault on the principles and practice of democratic governance. That is untenable in the age of transparency, especially coming from an administration that is otherwise so quick to trumpet its commitment to open government."  Two days later, the Washington Post published an op-ed by Harold Meyerson that lamented, "the administration has kept congressional input on TPP to a minimum — more precisely, at zero."

Three days later, two-thirds of the Democratic freshmen in the House of Representatives signed a letter that lambasted the administration's TPP secrecy: "Unfortunately, today TPP FTA talks continue in extreme secrecy.  The administration has yet to release draft texts after more than three years of negotiations, and the few TPP FTA texts that have leaked reveal serious problems."

Capping off the parade of pressure for TPP transparency, on Thursday Senator Elizabeth Warren (MA) sent a letter to Michael Froman, Obama's pick to be the next top U.S. trade official, requesting that he "make fully public the bracketed text of the TPP."  She criticized the lack of TPP transparency, arguing, "Without transparency, the benefit from robust democratic participation -- an open marketplace of ideas -- is considerably reduced."

It seems this growing chorus of calls to release the TPP text has finally pushed the Obama administration to let at least one member of Congress get a look at the deal.  We hope and expect that revelations to other members of Congress will now follow.

Meanwhile, the rest of us are still shut out.  Upon granting Congressman Grayson a glimpse at the text, USTR apparently instructed him in no uncertain terms to keep mum about what he saw.  Grayson said, "I get clearance because I'm a member of Congress, but now they tell me that they don't want me to talk to anybody about it because if I did, I'd be releasing classified information...It is ironic in a way that the government thinks it's alright to have a record of every single call that an American makes, but not alright for an American citizen to know what sovereign powers the government is negotiating away."

The calls for transparency listed above did not merely argue that the TPP text should be revealed to Congress, but to the broader public who would have to bear the brunt of the FTA's impact.  As Senator Warren stated in her letter, "if members of the public do not have reasonable access to the terms of the agreements under negotiation, then they are unable to offer real input into the process."  Real public input is critical for a deal that threatens everything from Internet freedom to medicines access, from food safety to financial stability.

As we noted in our New York Times op-ed, "Even the George W. Bush administration, hardly a paragon of transparency, published online the draft text of the last similarly sweeping agreement, called the Free Trade Area of the Americas, in 2001."  You would hope the Obama administration could at least match the transparency of the Bush administration and publish online the text of largest U.S. "trade" deal to date.  We'll continue pushing until that modest request is also granted.

All the concerns you have been blogging about are very serious, but it is also worth remembering that the EU has been running a trade surplus with the U.S. for a long time. We need to get tougher with the EU on trade, not eliminate the few remaining tariffs we do have, until we are in much more of a trade balance with them. They have been taking advantage of us for a long time, and this deal would just take away some of the few remaining tariffs we do have.

see the post @naked capitalism on TPP and Rep. Grayson being able to see but not discuss:
http://www.nakedcapitalism.com/2013/06/more-obama-administration-secrecy-rep-grayson-sees-and-cant-discuss-classified-trans-pacific-trade-agreement-draft.html

Worth noting on the topic I am aware that Rep. Keith Ellison from Minnesota is holding a public forum on the TPP on July 1st. I commend acts such as this to spread information to the electorate and to hold members of Congress accountable. It is worth encouraging and demanding similar acts to add transparency and to pressure law makers to consider the input of citizens through face to face interactions. There is a Congressional recess coming later this summer and perhaps there will be more instances of "town hall" forums to discuss this and other pressing issues with our elected representatives.