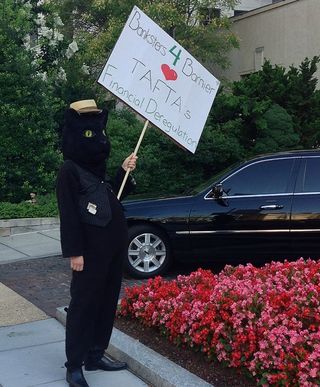 On the heels of the first round of negotiations of the Transatlantic Free Trade Agreement (TAFTA) held in Washington DC last week, the European Union's Commissioner for Internal Market and Services Michel Barnier spoke at  at the Brookings Institution on his way to meet with U.S. Treasury Secretary Jack Lew.  Much to the dismay of consumer advocates who have pushed for financial re-regulation since the crisis, Commissioner Barnier has been an outspoken critic of aspects of the Dodd-Frank financial reform, and has made clear his intentions to use TAFTA negotiations to go after them!

Big U.S., Canadian, and European banks, which have cited U.S. trade obligations in their attempts to water down pieces of Dodd-Frank, are likely quite pleased to have Commissioner Barnier on their side.  Perhaps that's why a literal fat cat with a sign that read "Banksters for Barnier Heart TAFTA's Financial Deregulation" came to greet the Commissioner outside the event at Brookings yesterday.

The Commissioner's talk, hosted by the normally very straight-laced and dry Brookings Institution, seemed to spark activist creativity.  Not only was there a feral feline outside, but apparently the same pranksters, who had distributed cards at the TAFTA negotiations ostensibly from the National Security Agency welcoming European negotiations and thanking them in advance for sharing their negotiating positions, were at it again.  This time I saw taped up in the Brookings restroom stall a similar card that said "The NSA commends Commission Barnier on his remarks in advance (because we read all of his emails)".  That poke probably didn't sit too well with the European officials who are dealing with officials from member states who are hopping mad about the claims of NSA spying on European diplomatic missions. 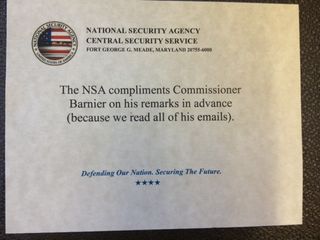 Mr. Barnier nervously mentioned that he had "the pleasure to meet a fat cat with a sign that said Barnier is a deregulator," before giving his prepared remarks about "Restoring Momentum in Transatlantic Cooperation on Financial Reform".

During the question and answer period, I took the opportunity to ask Commissioner Barnier the following question:

"In the wake of the financial crisis, consumer protection groups have worked hard to re-regulate the financial service industry in order to avoid future devastating crises.  In the U.S., Dodd-Frank has been a key piece of this.  And as I’m sure you are aware, Wall Street firms and others have lobbied hard to water down aspects of the rulemaking on Dodd-Frank including on its cornerstone Volcker rule. Other important efforts include the proposed new Fed regulations for foreign banks' legal forms and requirements. You have stated repeatedly your concerns about these and other aspects of U.S. financial regulation and impacts on European banks, and mentioned your intent to address these concerns in the TAFTA/TTIP negotiations.

Senators Elizabeth Warren and Sherrod Brown have publically stated that they find it inappropriate for  so-called trade negotiations to be used as a back door to undermine financial regulation.  The TransAtlantic Consumer Dialogue has prioritized its focus on TAFTA in part due to your comments.
Later you have said that you do not intend to undermine regulation. To an outside observer, including to the banks that support your call to address these issues in TAFTA, it appears that the intent is to use TAFTA to push the same agenda of the largest banks responsible for the financial crises to thwart financial re-regulation efforts in the U.S.? Can you clarify?"

Commissioner Barnier responded, "I can't imagine how anyone would use the TTIP  [which we call TAFTA] to lower the protection for consumers, small investors and taxpayers. At least I would not accept that."

We certainly hope this is the case, though his explicit targeting of specific aspects of U.S. financial re-regulation eerily echoes the desires of the biggest banks.  Just minutes prior to my question, Commissioner Barnier's answer to a question from a representative of a large Japanese bank about his opinion on the new Fed rule on foreign banking institutions was "On that point, I seek exactly what you seek yourself. I think this proposal of legislation must evolve."