Home Archives Subscribe Back to TradeWatch.org
Will U.S. Face Trade Sanctions for Anti-Smoking Law?
A Fast Track to Greater Inequality?

Obama Hints at Unfair Trade as a Cause of Stagnant Wages

In his economic speech at Knox College yesterday, President Obama acknowledged the role of unfair trade in stagnant wages and growing inequality:

In the period after World War II, a growing middle class was the engine of our prosperity...But over time that engine began to stall, and a lot of folks here saw it...Global competition sends a lot of jobs overseas. It became harder for unions to fight for the middle class...And so what happened was that the link between higher productivity and people's wages and salaries was broken...So the income of the top 1 percent nearly quadrupled from 1979 to 2007, but the typical family's incomes barely budged.

That's all true.  Despite a doubling of U.S. workers' productivity, real median wages hover at 1979 levels.  What does unfair trade have to do with this?  We spell it all out in our synopsis of the economic impacts of the offshoring-prone "free trade" era, enabled by the undemocratic power grab known as Fast Track, which is ironically now supported by Obama's own administration. Here are some critical excerpts:

Trade agreement investor privileges promote offshoring of production from the United States to low-wage nations. In the past, trade competition came from imports of products made by foreign companies operating in their home countries. But today’s “trade” agreements contain various investor privileges that reduce many of the risks and costs previously associated with relocating production from developed countries to low-wage developing countries. Thus, many imports now entering the United States come from companies originally located in the United States and other wealthy countries that have moved production to low-wage countries. For instance, over half of China’s exports are now produced by foreign enterprises, not Chinese firms.  American workers effectively are now competing in a globalized labor market where some poor nations’ workers earn less than 25 cents per hour.

The bargaining power of American workers has been eroded by threats of offshoring. In the past, American workers represented by unions were able to bargain for their fair share of economic gains generated by productivity increases.  But the investor protections in today’s trade agreements, by facilitating the offshoring of production, alter the power dynamic between workers and their employers. For instance, a study for the North American Commission on Labor Cooperation – the body established in the NAFTA labor side agreement – showed that after passage of NAFTA, as many as 62 percent of U.S. union drives faced employer threats to relocate abroad, and the factory shut-down rate following successful union certifications tripled.

Trade policy holds back wages even of jobs that can’t be offshored. When workers in manufacturing are displaced and seek new jobs, they add to the supply of U.S. workers available for non-offshorable, non-professional jobs in construction, health care, hospitality and more. The Bureau of Labor Statistics has projected that some of the U.S. economy’s fastest job growth in the coming decades will occur in such low-skill occupations. But as increasing numbers of American workers, displaced from better-paying jobs by current trade policies, have joined the glut of workers competing for these non-offshorable jobs, real wages have remained stagnant in these growing sectors.

And that, in a nutshell, is how Pres. Obama got from "Global competition sends a lot of jobs overseas" to "the typical family's incomes barely budged." Unfair trade deals, built for offshoring, reduced workers' bargaining power, forced displaced manufacturing workers to take big pay cuts, and contributed to the overall glut of workers competing for lower-wage jobs. Now if only his trade negotiators would spot the unfair trade link and stop pushing more offshoring-prone "free trade" deals. 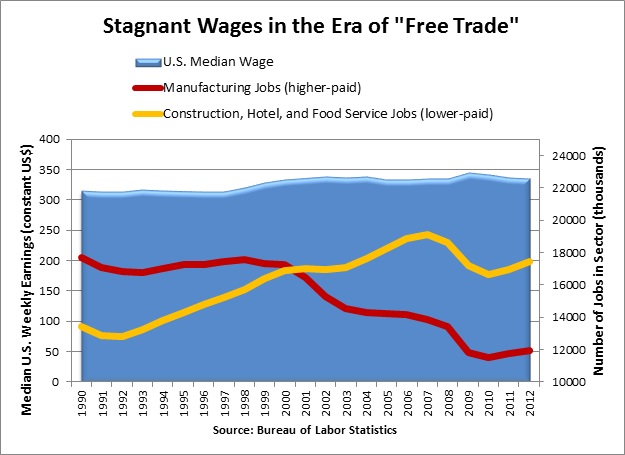 Please give credit where it's due. Mandatory workfare replacement labor, prison labor, NAFTA, etc., have all been working powerfully to suppress wages and help phase out the middle class -- all with the support of the middle class!