Colombia Uprising: Is This What "Free Trade" Looks Like?

Colombian farmers are dumping tons of oranges onto highways.  Roadways have been blocked throughout the country.  Hundreds of thousands of Colombian protestors are risking rubber bullets and even live ammunition to take to the streets. 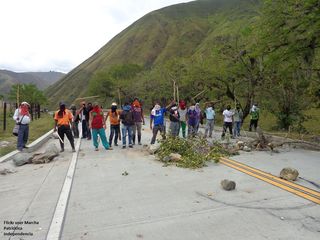 Unfair trade is one of the rallying cries of the underreported protests currently wracking Colombia. Protesting groups are asking the Colombian government (among other things) to suspend and renegotiate the U.S.-Colombia “Free Trade” Agreement (FTA).  Thanks largely to the FTA, which took effect in May 2012, highly-subsidized U.S. agricultural products have started to swamp Colombia’s small-scale farmers, contributing to their displacement, the deterioration of livelihoods across Colombia, and the loss of the country’s food security.

Before the FTA was passed, Colombia’s own Minister of Agriculture predicted a miserable outcome for the country’s farmers. He warned that if the asymmetric deal took effect, Colombian farmers “would have no more than three options: 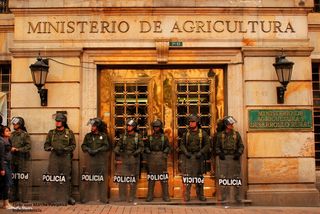 migration to the cities or other countries (especially the United States or bordering countries), leaving to work in drug cultivation zones, or affiliating with illegal armed groups.” Not content to accept any of those three fates, Colombia’s farmers are now making their voices heard.

For an on-the-ground perspective on the FTA-fed tumult in Colombia, Julia Duranti of Witness for Peace’s team in Colombia offers this guest post:

A Struggle for Survival in Colombia’s Countryside

Though you wouldn’t know it from most English-language media or from heads of state, last week tensions in Colombia’s countryside came to a head. But not between the military and armed groups like the FARC, the usual suspects in foreign reporting on Colombia. The source of this uprising lies in policies not up for discussion in the country’s current peace talks: the impact of the U.S.-Colombia FTA – implemented in May 2012 – and policies that have similarly afflicted Colombian campesinos (small-scale farmers). 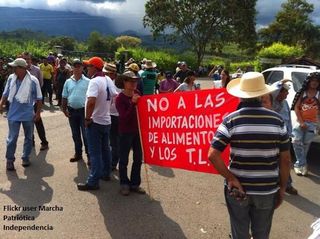 Colombia’s campesinos launched the protests – which have overtaken the nation – because they perceive the FTA, and policies like it, to be a threat not just to their production, but their very existence.

The National Grassroots and Agrarian Strike began on August 19 when over 200,000 potato, rice, fruit, coffee, dairy and livestock farmers; miners; truck-drivers; teachers; healthcare workers; and students left their work activities and blocked roadways in 30 key corridors around the country, with the provinces of Boyacá, Valle del Cauca and Nariño being most affected.

The diverse protesters’ list of demands includes suspension and renegotiation of the U.S.-Colombia FTA, financial and political support for agricultural production, access to land, recognition of campesino, indigenous and Afro-descendant territories, the ability to practice small-scale mining, the guarantees of political rights of rural communities, and social investment in rural areas, including in education, healthcare, housing and infrastructure.

Along with roadblocks and marches, in symbolic acts intended to express their inability to earn a living and their frustration at government inertia, dairy farmers in Boyacá poured out over 6,000 liters of milk while citrus farmers in Valle del Cauca dumped 5,000 tons of oranges onto the highway. What could possibly bring farmers to willingly destroy their own products? Campesino livelihoods have been devastated, a process that began with economic liberalization under President Cesár Gaviria in the early 1990’s and continued with a host of Colombian laws that cleared the way for the U.S-Colombia FTA. Then came the FTA itself.  Just over a year old, the deal is already taking its predicted toll on Colombia’s countryside. An FTA-enabled influx of heavily-subsidized U.S. products has contributed to the breakdown of Colombia’s local economies and the displacement of its farmers, fueling the urgency of the current protests.

Despite promises of more jobs and increased exports, the balance after year one of the U.S.-Colombia FTA is dismal for Colombia. According to Colombian paper El Espectador, Colombia’s exports to the U.S. actually fell 4.5% between May 2012 and March 2013, while Colombia’s imports from the U.S. rose 19.7%. In the agroindustrial sector on which many Colombians depend for their livelihood, U.S. imports from Colombia rose 11.5%, but Colombian imports from the U.S. skyrocketed 70%. An economic study conducted prior to the FTA’s passage predicted that just such a scenario would lead to income losses of up to 70% for the vast majority of Colombia’s farmers, contributing to their displacement.

It is not only that strikers feel they cannot compete with heavily-subsidized U.S. production: they are actually prohibited from doing so. The FTA prohibits the Colombian government from subsidizing agriculture for export or domestic consumption, even as the U.S. government subsidizes U.S. agribusinesses to the tune of $15 billion each year.

Along with the FTA came Colombian laws that cleared the way for the deal’s implementation and that similarly plagued campesinos. These include:

All of these laws favor large-scale industrial production over small-scale producers that do not have the resources to comply with such regulations. Campesinos are incredulous: “When we produce things like milk or chickens for our communities, of course we ensure that those products are safe because our families are the ones consuming them. It is an economy based on trust. But these new laws destroy that,” expressed one community member in Cauca to a recent Witness for Peace delegation.

Whereas Colombia used to meet its food production needs internally, it is now importing food, including the coffee for which it is so famous. The “mining engine” promoted by the Santos administration as a mechanism for economic growth focuses entirely on resource extraction to generate wealth, using the profits to import almost everything else. This includes replacing land that was previously used for food cultivation with palm oil and sugarcane monoculture for biofuel production. Left landless and without their livelihoods, rural communities are forced to migrate to cities, where they face urban poverty and social breakdown. 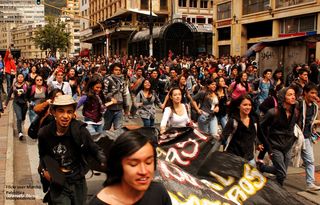 Protestors and their allies recognize that the effects of such policies are not confined to rural areas and that they are already spreading to Colombia’s working class and urban dwellers as well. In a march of solidarity through the capital of Bogotá on Sunday, protestors carried signs defending food security, small-scale producers, and Colombia’s national sovereignty, chanting, “Amigo mirón, únase al montón. Su abuelo es campesino y usted trabajador.”  “Bystander, join the struggle! Your grandfather was a farmer and you are a worker,” and, “Queremos papa. Queremos maiz. Multinacionales fuera del pais.”  “We want potatoes, we want corn—multinationals, get out of our country.” They made their way peacefully to the central Plaza de Bolívar to share their message with their government, a government that wants to pretend that they don’t exist.

In spite of President Juan Manuel Santos’s claim on August 25 that “the supposed agricultural strike doesn’t exist,” since day one of the protest his administration has met peaceful protestors with extreme repression by the Army, police and anti-riot police (ESMAD). Reports indicate that clashes between protestors and public security forces have claimed five lives, wounded hundreds on both sides and led to over 175 arrests, including four human rights workers and six journalists, who had their equipment confiscated.

Protestors have been fired upon by public security forces using rubber bullets and even, in some cases, live ammunition. Police forces have also fired tear gas at protestors, including from helicopters. Protestors have been threatened, intimidated and had their food supplies stolen by police, who have used broad interpretations of anti-terrorism legislation passed two years ago to detain demonstrators on public roadways on the basis of anything from disrupting public order to terrorism. Predictably, Defense Minister Juan Carlos Pinzón claimed the strike has been infiltrated by the FARC.

The government’s response has been incoherent – attempting to paint the strike as simultaneously nonexistent yet infiltrated by terrorists, as insignificant yet necessitating 16,000 troops in full riot gear using brutal repression tactics. Meanwhile, the government has so far ignored the calls of coordinators for national-level negotiations related to economic and agricultural policy. The government has extended some offers of negotiation at the local level, as in the provinces of Cauca and Boyacá, only under the condition that protestors remove their roadblocks. But protestors, weary of similar offers made in the past that were not followed through, refuse. As potato farmer Cesár Pachón said, “We’re not asking for more money. We’re asking for conditions and agricultural policies that allow us to survive.”

The current strike, therefore, represents more than a demand for agricultural subsidies or protections for certain industries. It is a response to a neoliberal model whose relentless crusade for natural resources and whose stark social inequalities are at the heart of Colombia’s conflict; a response to a model that has no room for the small-scale production that defines the livelihoods of campesinos.

I'm sorry that something that something else that the us has become involved in has turned to feces as it should. The world should know better than to allow anyone from the us to help anyone as it quickly turns bad, very bad for the middle class and poor.Maybe a time will come when the us is ignored and then the world will be a better place for mankind.

The rules and regulations in the 'agreement' will make Columbia an even more war torn, drug infested country. It will make life miserable and more toxic for millions of people who have managed to live in harmony with nature for centuries. Those who signed obviously benefited in some way. We need to follow the money and see who is behind these crazy treaties.(I'm sure we will find the usual suspects, large seed, pesticide, toxic food, etc. the corporate world.)
To read the conditions of this treaty make people wonder about the insanity of it. The same dumping of staple foods such as corn occurred in Mexico, upon signing the NAFTA. This led to massive migrations and miserable poverty in Mexico. It is history repeating itself. There is a new treaty in the mix, we must all get out in the streets to protest, much like in Seattle, November, 1999. And the brave citizens of Columbia.
Although this issue has been mostly ignored in the US mainstream press, TV 5 monde has been covering it in depth. The US press is deceptive and silent when it comes to the lives of ordinary people being destroyed by the corporate bulldozers.

I remember reading in college about people in Peru finally getting away from the madness of the Shining Path, that was itself a reaction to the madness of mercantilism. Seems like personal freedom is the common denominator - they both hate it.