Home Archives Subscribe Back to TradeWatch.org
Obama Hints at Unfair Trade as a Cause of Stagnant Wages
Video: "Peril in the Pacific" Spotlights TPP's Dangerous Investor Privileges

A Fast Track to Greater Inequality?

President Obama is thankfully talking again about the yawning inequality in the U.S.  In an interview with the New York Times late last month, he said that the ever-widening gap in income is "not a future that we should accept." Unfortunately, it's the future that his trade negotiators are promoting.

While Obama denounces inequality, the Obama administration is rushing to conclude talks on the Trans-Pacific Partnership (TPP), a sweeping commercial pact with 11 Pacific Rim countries that implicates everything from the cost of our medicines to the safety of our food. The TPP also threatens to further widen the gap between rich and poor, as emphasized by economist Nancy Folbre in a New York Times piece this week, by perpetuating the inequality-spurring history of unfair trade deals spelled out below.

Obama recently implied that unfair trade "sends a lot of jobs overseas." When the jobs being offshored are primarily those of workers in the middle and lower income brackets, as has been true under the last couple decades of TPP-like deals, middle-class wages stagnate as upper-class incomes climb. The result: increased income inequality.

But Obama seems to miss this connection.  Just last week, in his economic speech in Chattanooga, Tennessee, he praised the Korea Free Trade Agreement (under which exports have been falling) and vowed to get authority from Congress to sign more such deals.  Obama's top trade official, Michael Froman, has confirmed that Obama would like to Fast Track deals like the TPP through Congress. Fast Track was an extreme and rarely-used maneuver that empowered executive branch negotiators, advised by large corporations, to ram through unfair trade deals like the TPP by unilaterally negotiating and signing the deals before sending them to Congress for an expedited, no-amendments, limited-debate vote. Apparently, Obama would like more of the same.

As unfair trade deals have been Fast Tracked into law, U.S. income inequality has jumped to levels not seen since the robber baron era. Today, the richest 10 percent of the U.S. is taking nearly half of the economic pie, while the top 1 percent is taking one fifth. Wealthy individuals’ share of national income was stable for the first several decades after World War II. But that share has shot up 45 percent for the richest 10 percent and 117 percent for the richest 1 percent since the passage of Fast Track in 1974, a time period characterized by a series of unfair trade deals. The income share of the richest 10 percent escalated particularly abruptly after the 1994 enactment of the North American Free Trade Agreement (NAFTA). See the graph below.

The median family has been losing about as much to trade-induced inequality as to taxes. Longstanding economic theory predicts that trade will increase income inequality in developed countries. In the 1990s, the pro-NAFTA Peterson Institute for International Economics (PIIE) sought to quantify the effect of trade policy on U.S. income inequality, and found that nearly 40 percent of the increase in inequality was attributable to U.S. trade policy. When the Economic Policy Institute (EPI) updated the PIIE figures, it found that the median U.S. family lost about $2,300 per year (in today’s dollars) from the burden of rising inequality due to trade. The wage losses from trade each year for the median family are on par with the median household’s income tax burden. EPI projects that, if current trade policies and trends continue, all wage gains made since 1979 by workers without a four-year college degree (65 percent of the U.S. workforce) could be erased.

Changes in technology or education levels do not fully account for U.S. wage pressures. Some have argued that advances in computer technology explain why less technologically-literate U.S. workers have been left behind, asserting that more education – rather than a different trade policy – is how to end income inequality. While more education and skills are desirable for many reasons, these goals alone will not solve the problems of growing inequality. First, as documented in a Federal Reserve Bank paper, inequality started rising as systematic U.S. trade deficits emerged, in the early Fast Track period, far before most workers reported using computers on the job. Second, college-educated workers have also seen their wage growth stagnate, even in technologically sophisticated fields like engineering. Thus, rectifying unfair trade policy, not only better educating U.S. workers, will be an essential part of tackling rising income inequality. 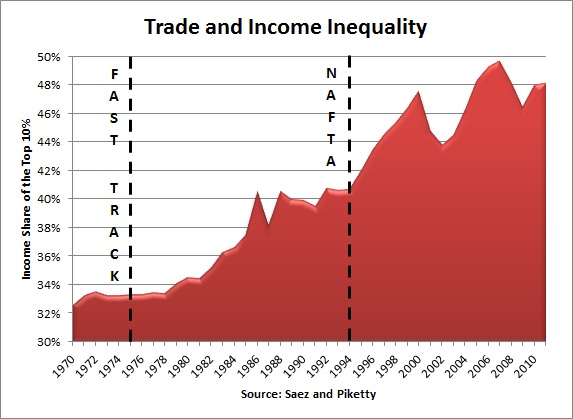