Construction workers stopped working and peered down from the scaffolding high above. Tourists stopped to take pictures. The sound of chanting could be heard blocks away. It was a beautiful day for a rally.

Last Friday, nearly 100 environmental, labor, family farm, faith, public health and trade activists gathered outside the U.S. Trade Representative’s (USTR) office to show the Trans-Pacific Partnership (TPP) lead negotiators that people in the U.S. do not want a “free trade” deal that puts corporate interests over those of the middle class. 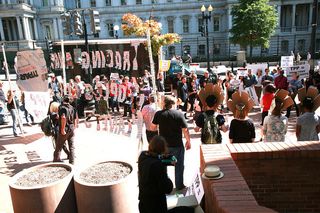 The TPP negotiators were not in Washington, D.C. for a formal round of negotiations, but for a below-the-radar “intersessional” meeting. Such secretive meetings are now being scheduled at a moment’s notice in countries across the Pacific Rim as the U.S. cracks the whip in desperate attempt to get negotiations all wrapped up and tied with a neat bow by the end of the year, despite the yawning controversies and gaps in agreed-upon text.

These “intersessionals” drive the backdoor TPP talks even further underground and away from public scrutiny. Unlike the formal rounds, USTR is not even revealing the location, timing or agenda of the intersessionals. And there are no “stakeholder sessions" to which concerned groups and the general public are invited.

So we created our own stakeholder session.  On the street.  Outside of USTR’s office. 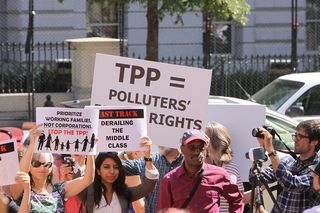 Not about to let top-secret meetings get in their way, the crowd gathered in front of the USTR office last week filled the air with demands for fair trade, against the TPP’s corporate coup, and against Obama’s plan to railroad the controversial deal through Congress with Fast Track.

A medical student in his white coat waved a sign next to a union member demanding the end of "trade" agreements that jack up the cost of medicines while shipping U.S. jobs overseas. Student activists held signs calling for greater transparency. As the D.C. lunchtime crowd merged with tourists walking by, the rally swelled to incorporate newcomers who grabbed signs and joined the cries for justice:

“Regulating Wall Street is what we need, it’s time to flush the TPP!”

“People with AIDS under attack, No TPP and no Fast Track!”

“It might be really good for Monsanto, but it sure ain’t good for us!”

“The TPP has gone astray, there’s no shame to walk away!”

With a crowd diverse enough to include a middle aged white man in a suit, a tattooed girl with dreads, a Chinese exchange student, and a modern day hippie in clogs, it was clear that the TPP impacts each and every one of us in profound ways.  Across the U.S., people from all walks of life with all sorts of different interests are coming together to derail Fast Track and stop the TPP. The contagious, hopeful, and determined energy that rocked the crowd on that sidewalk outside the USTR building is increasingly being manifested all over the country in rallies, town hall meetings, teach-ins, and meetings with members of Congress. 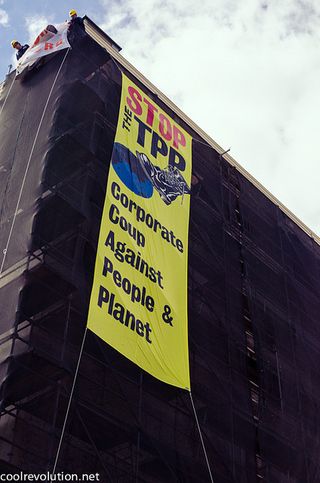 In D.C., protests continued throughout the negotiators’ visit. One of the most dramatic moments happened on Monday when activists from FlushTheTPP.org, CODEPINK, Veterans for Peace, and Earth First! emblazoned the very headquarters of TPP scheming with anti-TPP banners.  Disguised as construction workers, activists scaled scaffolding to reach the roof of the USTR’s buildings, and then covered the USTR offices with banners saying no to the TPP and demanding transparency for the sweeping deal.

The fight is on. No matter how deep into the shadows the TPP negotiators try to hide, activists all over the world will be there to shine a light on a deal gone terribly wrong.

Why is the President even considering this agreement? Doesn't he care about the people of this country and the state of our economy and job situation? And what about our health? Do imports meet our standards?
I still can't find out if Warner and Kaine are for or opposed to the TPP deal. All I get are emails from Warner that "tap dance." No substance or answer. And nothing from kaine.

It's like an invasive weed in a garden, the Corporate plutocracy roots are securely embedded in our political system with their greed sucking the nutrients out of our democracy at the detriment of the crops (people).

It has always been my understanding that Congress had to negotiate/regulate all Foreign Trade Agreements. Does anyone know where Private Negotiation Groups have suddenly received this authority????