At this week's G20 summit in Russia, President Obama has been trying once again to sell two enormous "trade" pacts -- the Trans-Pacific Partnership (TPP) and the Trans-Atlantic Free Trade Agreement (TAFTA) -- using the beleaguered pitch that such deals will deliver jobs by boosting exports.

But government trade data released this week douses Obama's export promise with another bucket of cold reality.  Under the Korea "free trade" agreement (FTA), a model for the TPP, U.S. exports have been steadily falling, imports have been rising, and job-displacing trade deficits have surged.

The U.S. monthly trade deficits with Korea, meanwhile, have soared about 50% higher than the pre-FTA level.  In 16 out of 16 months since the FTA took effect, the U.S. trade deficit with Korea has exceeded the average monthly deficit seen the year before the deal.

The dismal record of the Korea FTA for U.S. exports and jobs does not bode well for the administration’s attempt to push the controversial TPP through Congress on a democracy-defying Fast Track under the tired and counterfactual promise of export promotion.  Members of Congress are not likely to be persuaded to revoke their constitutional authority over trade and allow the TPP to be railroaded through Congress after seeing the disappointing data for a deal upon which the TPP is modeled. 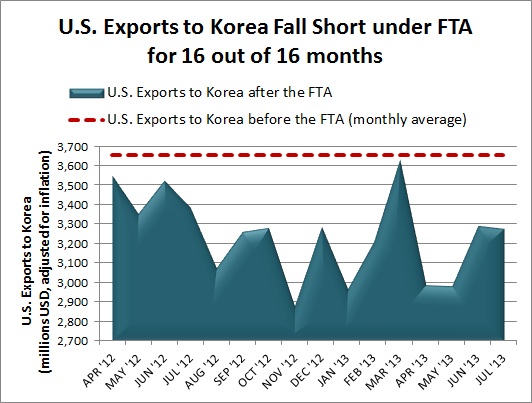 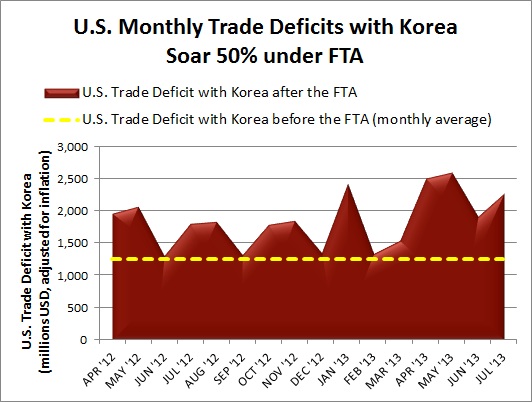 This comparison of results to predictions tends to refute the claim that FTAs improve our balance of trade. What would be really devastating is to take all of the post-war FTAs and compare the claims made to Congress in the approval process to what actually happened after approval. Perhaps this has been done. Can you link to any such study?

It's a bit discouraging to know that someone somewhere in the U.S. is looking at these figures and nodding in satisfaction even as we are shaking our heads in disappointment to see that once again ... THE SYSTEM ISN'T BROKEN; IT'S FIXED.

If President Obama is trying to push these trade agreements, we can almost depend on Congressional republicans who want to derail any plan he proposes to vote it down. For once they'll be doing us all a favor. Who'da thunk it?????