Yesterday, just before a meeting of the President’s Export Council, we asked whether the powerful, Obama-advising group would recognize that U.S. export growth is seriously lagging and that status-quo “free trade” deals have failed to fulfill promises of increased exports.

Somehow the room full of corporate representatives and government officials, “the principal national advisory committee on international trade,” which exists to “promote export expansion” and “discuss and resolve trade-related problems,” made it through two hours of prepared speeches without once acknowledging that we’re 18 years behind schedule to meet Obama’s goal to double exports.

Groupthink is one plausible explanation.  The members of Obama's top "export" panel include:

It turns out that Obama's "principal national advisory committee on international trade" doesn't need to include a broad cross-section of groups and concerns implicated by trade policy.  Perhaps if a single worker, farmer, or advocate had been present, someone would have pointed out the obvious: exports (i.e. the group's raison d'être) are not doing well. 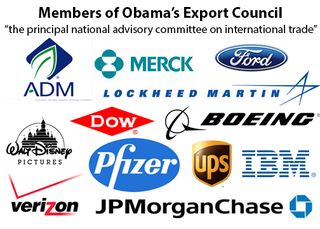 Instead, the group touted insignificant data points as “gains.”  For example, President Obama declared, “Part of the reason we set up the Export Council was to make sure we meet our goal of doubling exports in a relatively short period of time.  And we now sell more goods overseas than ever before.”

Um, the second sentence’s mundane “achievement” is irrelevant to the first sentence’s central goal.  We have actually “sold more goods overseas than ever before” in 43 of the last 53 years – rising exports has been a longstanding accompaniment to economic growth, not a novel cause for bragging rights.

Actually, Obama’s unremarkable claim may not even prove true for 2013. The most recent government data indicates that U.S. goods exports so far this year are actually one percent lower than they were in the same period last year.  At the current rate, we’d expect 2013 to be a historically unique year of falling exports.

If so, Obama’s export-doubling goal, which already looked impossible after last year’s sluggish two percent growth rate (mentioned just once during the Export Council meeting), would become even more remote.

No one brought up how exports have actually fared under similar pacts.  No one mentioned that exports to Korea have actually fallen 10 percent under the Korea “free trade” agreement (FTA), a blueprint for the TPP.  No one mentioned that export growth to countries that are not FTA partners has actually exceeded U.S. export growth to countries that are FTA partners by 38 percent over the past decade.

Instead, the Council affirmed the tired and counterfactual narrative that deals like the TPP and TAFTA, which would rewrite wide swaths of non-trade domestic policies, are necessary for export promotion.

And they reiterated that getting the increasingly controversial deals past a skeptical Congress and a critical U.S. public would require Fast Track – the undemocratic tool used to ram through Congress the Korea FTA, NAFTA, and other past controversial deals whose results the Council resolutely ignored.

In a decision that took less than thirty seconds, and entailed zero deliberation, the Council approved a resolution supporting Obama’s push for Fast Track.  The Chair, representing Boeing, did not even bother to call a voice vote, opting instead to “assume no objection” and then declare approval of the resolution by stating, “I so move, all in favor, okay.”

So is the President’s Export Council really blind to the current export problems that are central to its mandate?  Are they really unaware of the shoddy export record of “free trade” deals to which they are unblinkingly committed?

Or do the Council members, representing some of the country’s most aggressive corporate interests, have something else to gain by advocating for the TPP and TAFTA?  For example, Council member J.P. Morgan, Wall Street’s largest firm, might be less concerned with the deals’ implications for exports and more interested in the constraints that the pacts would impose on the reregulation of Wall Street.

Maybe Pfizer and Merck, both incoming Council members, decided to join the powerful body to push for the TPP proposal to expand their monopoly patent protections, increasing their profit margins and our medicine prices.  And Walt Disney may be particularly keen, as a Council Member, in pushing for the TPP to include some of the draconian copyright provisions that the corporation failed to get enacted in the Stop Online Piracy Act (SOPA), defeated in Congress as a threat to Internet freedom.  Archer Daniels Midland, meanwhile, would probably like to use its Council membership to push for TAFTA to weaken EU limits on genetically-modified food, while Council member Verizon has already expressed its hope that the pact can be used to roll back Europe’s data privacy safeguards.

It’s possible that the President’s Export Council is delusional about the shoddy export record of the status-quo “trade” model that the TPP and TAFTA would expand.  It’s more likely that they are willfully ignorant.  The corporations’ unqualified support for the pacts likely stems not from data-defying hopes of export promotion, but from realistic expectations that the sweeping deals would rewrite health, environmental, financial, and other domestic safeguards that the corporations find inconvenient – and that most of the rest of us find essential.

Will President Obama grant the wishes of his corporate Council members?  In his closing remarks for the meeting, Obama joked, “I am expecting a gold watch from Boeing at the end of my presidency, because I know I’m one of the top salesmen for Boeing.” As Obama continues attempting to sell the TPP and TAFTA to the U.S. public and fast track the controversial pacts through Congress, the likes of Boeing, J.P. Morgan, and Pfizer must be lining up the gold watches.

Everyone needs to contact their representatives in congress and tell them to stop this trade deal before it is too late.

Time for a new Corporate Export Council. Obama has surrounded himself with the good ole white boys' club -- and he wonders why things aren't going better. If you keep doing the same old thing, you're going to get the same old results. Duh.