This week's government release of trade data highlights a stunning decline in U.S. exports to Korea, a rise in imports, and a ballooning of the U.S. trade deficit under the Korea Free Trade Agreement (FTA).  With such sorry results emerging from the Korea deal, it's little wonder that 178 Democrats and Republicans this week rejected Obama's bid to Fast Track through Congress another FTA -- the sweeping Trans-Pacific Partnership (TPP).

U.S. goods exports to Korea fell 8 percent and imports from Korea grew 8 percent under the first 18 months of the Korea deal, relative to the 18 months before the deal took effect. The shift provoked an incredible 56 percent growth in the U.S. trade deficit with Korea in the FTA’s first year and a half.

The Korea FTA’s abysmal record for U.S. jobs has been consistent: in 18 out of the 18 months since the deal took effect, U.S. exports to Korea have fallen below the average level seen in the year before the deal.  And in every single one of the 18 months since the FTA, the U.S. deficit with Korea has exceeded the average monthly deficit before the deal took effect (see graphs below). These losses amount to tens of thousands of lost U.S. jobs.

The disappointing data from the Korea FTA, a template for the TPP, is poised to generate even more congressional opposition to Obama’s request for Fast Track’s extraordinary authority to railroad the TPP through Congress on an expedited timeline with limited debate and no amendments. 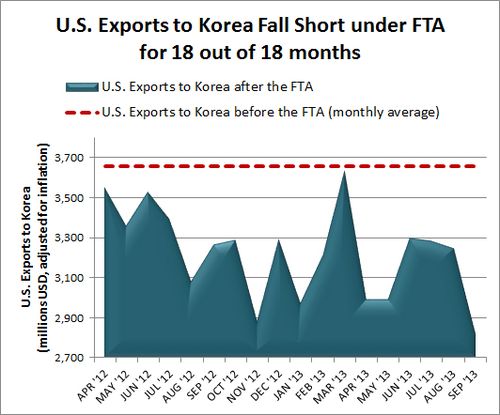 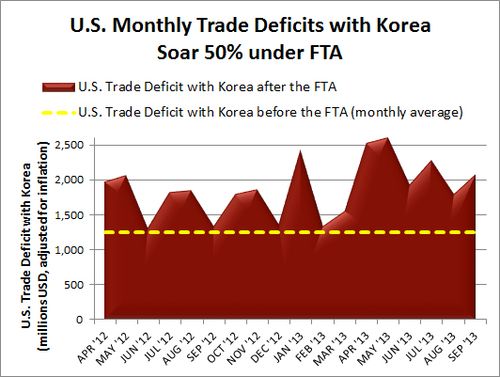 Thank you for continuing to focus on how these FTAs make our trade deficit worse, among other issues. When I hear some FTA opponents say that the problem with an FTA isn't tariff reduction, I always want to say "stop! The tariff reduction with these nations that run constant trade surpluses with us, year after year, is definitely a problem-- as well as all the other horrible stuff."