Home Archives Subscribe Back to TradeWatch.org
Salt Lake TPP Talks End with Growing Pressure to Announce “Deal” at December TPP Ministerial, but No Resolution of Major Controversies
Members of Congress: Fast Tracking the TPP is a Non-Starter

Live from Bali: WTO to Blame for WTO's Failures (not India) 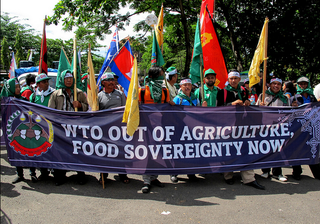 Protests supporting India's position outside (above) and inside (below) the 9th WTO Ministerial in Bali, Indonesia.

During this week’s 9th World Trade Organization (WTO) Ministerial in Bali, activists, largely led by Indian farmers' groups, have been gathering in the halls, chanting “food sovereignty now!” and carrying signs reading “USA – Hands off our food!” and “Support the right to food.”  Farmers, fisherman, and other members of civil society have also been protesting in large numbers against the Ministerial.

These actions are juxtaposed against finger-pointing by the U.S., other developed countries, and the mainstream media, which have been blaming India for the possible collapse of the talks in Bali (see: BBC, Financial Times, Washington Post, for example). Some are going so far as to imply that it is India’s stance that would be responsible for a resulting loss of legitimacy for the WTO and the entire multilateral trading system.

India’s transgression? Wanting to protect an ambitious and innovative law designed to address hunger and poverty in a nation that, according to the UN, is home to 25% of the world’s hungry poor. That law, the National Food Security Act, requires the Indian government to help pull the poorest farmers out of poverty by purchasing staple goods at a fixed price, and to feed the hungriest families by providing food at subsidized, below-market prices. 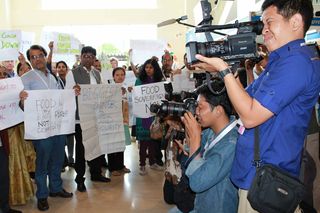 India's not alone.  Latin American and African countries, not wanting to face WTO challenges for their own programs to increase access to food, have indicated support for India's defense of its food security initiative.

The U.S. has labeled such programs as “trade-distorting.” But the hypocrisy of the U.S., which grants some of the highest levels of subsidies to its own farmers, totaling more than $14 billion in 2012 alone, remains an elephant in the room. That elephant has been largely unreported by the media and unmentioned in the speeches of U.S. officials that have criticized India’s refusal to subject food security to WTO rules.

Perhaps the real culprit of the WTO’s failure to produce a deal for nearly 19 years (a track record unlikely to be broken this week) is the WTO itself. The world's most powerful commerce agency continues to push an old model of globalization favored by corporate interests.  Despite opposition on a global scale, it has not proven willing to accept innovative approaches to address development concerns.  The breakdown of discussions in Bali (and before that in Seattle, Geneva, Cancun, Hong Kong...) is an unsurprising result of the WTO’s obstinate refusal to change –- not the result of a country’s decision to defend food security.