Recent Studies: Trade’s Contribution to Inequality Has Increased since the 1990s and Is Likely to Increase Further

Tonight President Obama is expected to address two linked subjects in his State of the Union address: the historic rise in U.S. income inequality and a trade policy agenda that threatens to exacerbate inequality. As we've repeatedly pointed out, Obama cannot have it both ways: he cannot propose to close the yawning income gap while pushing to Fast Track through Congress a controversial Trans-Pacific Partnership (TPP) "free trade" deal that would widen the gap. The TPP would expand the status quo "free trade" model that study after study has found to be an increasingly significant contributor to U.S. income inequality.

As unfair trade deals have been Fast Tracked into law, U.S. income inequality has jumped to levels not seen since the robber baron era. Today, the richest 10 percent of the U.S. is taking over half of the economic pie, while the top 1 percent is taking more than one fifth. Wealthy individuals’ share of national income was stable for the first several decades after World War II. But that share has shot up 51 percent for the richest 10 percent and 146 percent for the richest 1 percent since the passage of Fast Track in 1974, a time period characterized by a series of unfair trade deals. The income share of the richest 10 percent escalated particularly abruptly after the 1994 enactment of the North American Free Trade Agreement (NAFTA), as indicated in the graph below. 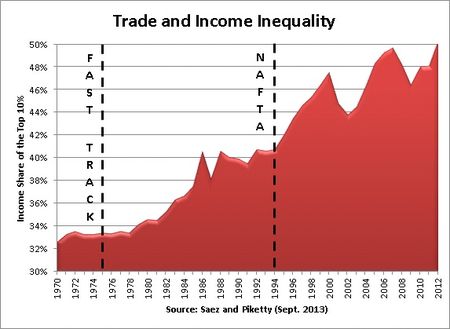 More recent studies have concluded that trade’s role in exacerbating U.S. income inequality has likely grown since the 1990s, as U.S. imports from lower-wage countries, and U.S. job offshoring to those countries, have grown dramatically, impacting an increasing swath of middle-class jobs. Further, an array of studies now project future increases in the offshoring of U.S. jobs, suggesting that even under current U.S. trade policy, trade flows will soon be responsible for an even greater share of rising U.S income inequality. Attempts to Fast Track through Congress controversial deals like the TPP, which would incentivize further offshoring, would only exacerbate the historically high degree of U.S. income inequality.

The International Monetary Fund authors find that the rise in income inequality from 1981-2003 in 20 developed countries, including the United States, is primarily attributable to trade and financial globalization trends. They conclude that globalization’s contribution to inequality has outweighed the role of technological advancement: “Among developed countries…the adverse impact of globalization is somewhat larger than that of technological progress” (p. 19).

In a Brookings Institution study, Nobel-winning economist Paul Krugman finds that trade flows likely now account for an even greater degree of U.S. income inequality than that found in a series of studies from the early 1990s, which had already concluded that trade liberalization had a negative, but modest, impact on income inequality in developed countries like the United States. In particular, Krugman notes that U.S. manufacturing imports from low-wage developing countries have grown dramatically in the last two decades, suggesting that the role of trade flows in spurring U.S. income inequality growth is “considerably larger” than before (p. 106).  Krugman concludes, “…there has been a dramatic increase in manufactured imports from developing countries since the early 1990s. And it is probably true that this increase has been a force for greater inequality in the United States and other developed countries” (p. 134).

Globalization, American Wages, and Inequality: Past, Present, and Future