Two years after the implementation of the U.S.-Korea Free Trade Agreement (FTA), government data reveal that the Obama administration’s promises that the pact would expand U.S. exports and create U.S. jobs are exactly opposite of the actual outcomes: a downfall in U.S. exports to Korea, rising imports and a surge in the U.S. trade deficit with Korea. Using the administration’s export-to-job ratio, the estimated drop in net U.S. exports to Korea in the FTA’s first two years represents the loss of more than 46,600 U.S. jobs.

The damaging Korea FTA record, detailed in a new Public Citizen report, undermines the administration’s attempt to use the same failed export growth promises to sell an already skeptical Congress on Fast Track authority for the Trans-Pacific Partnership (TPP), a sweeping deal for which the Korea FTA was the template.

Contrary to the administration’s promise that the Korea FTA would mean “more exports, more jobs”:

The U.S. exports downfall is particularly concerning given that Korea’s overall imports from all countries increased by 2 percent over the past two years (from 2011 to 2013). 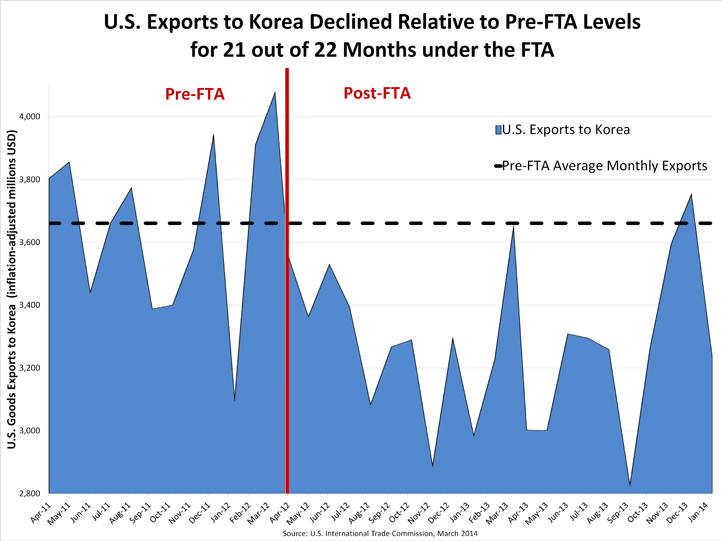 The average monthly trade deficit with Korea has ballooned 47 percent in comparison to the year before the deal. As U.S. exports to Korea have declined under the FTA, average monthly imports from Korea have risen four percent. The total U.S. trade deficit with Korea under the FTA’s just-completed second year is projected to be $8.6 billion higher than in the year before the deal, assuming that trends during the FTA’s first 22 months continue for the remaining two months for which data is not yet available.

“Most Americans won’t be surprised that another NAFTA-style deal is causing damage, but it’s stunning that the administration thinks the public and Congress won’t notice if it recycles the promises used to sell the Korea pact – now proven empty – to push a Trans-Pacific deal that is literally based on the Korea FTA text,” said Lori Wallach, director of Public Citizen’s Global Trade Watch. “The new evidence of the Korea FTA’s damaging record is certain to make it even more difficult for the Obama administration to get Congress to delegate its constitutional trade authority via Fast Track for the TPP.”

The decline in U.S. exports under the Korea FTA contributed to an overall zero percent growth in U.S. exports in 2013, rendering virtually impossible Obama’s stated goal to double exports by the end of 2014. At the export growth rate seen over the past two years, the export-doubling goal would not be reached until 2054. While the Korea pact is the only U.S. FTA that has led to an actual decline in U.S exports, the overall growth of U.S. exports to nations that are not FTA partners has exceeded combined U.S. export growth to U.S. FTA partners by 30 percent over the past decade.

“The data simply do not support the Obama administration’s tired pitch that more FTAs will bring more exports,” said Wallach. “Faced with falling exports and rising, job-displacing deficits under existing FTAs, the administration needs to find a new model, not to repackage an old one that patently failed.”

The Korea FTA has produced very few winners; since the FTA took effect, U.S. average monthly exports to Korea have fallen in 11 of the 15 sectors that export the most to Korea, relative to the year before the FTA (see graph below). And while losing sectors have faced relatively steep export declines (e.g. a 12 percent drop in computer and electronics exports, a 30 percent drop in mineral and ore exports), none of the winning sectors has experienced an average monthly export increase of greater than two percent. Ironically, many sectors that the administration promised would be the biggest beneficiaries of the Korea FTA have been some of the deal’s largest losers. 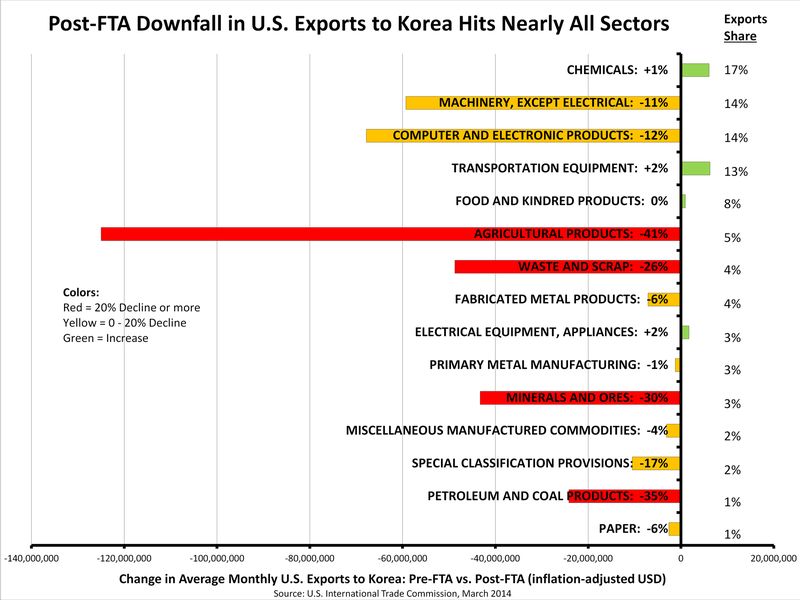 AGRICULTURE: While the administration argued for passage of the FTA in 2011 by claiming, “The U.S.-Korea trade agreement creates new opportunities for U.S. farmers, ranchers and food processors seeking to export to Korea’s 49 million consumers,” average monthly exports of U.S. agricultural products to Korea have fallen 41 percent under the FTA.

Compared with the exports that would have been achieved at the pre-FTA average monthly level, U.S. meat producers have lost a combined $442 million in poultry, pork and beef exports to Korea in the first 22 months of the Korea deal – a loss of more than $20 million in meat exports every month.

AUTOS AND AUTO PARTS: The administration also promised the Korea FTA would bring “more job-creating export opportunities in a more open and fair Korean market for America’s auto companies and auto workers,” while a special safeguard would “ensure… that the American industry does not suffer from harmful surges in Korean auto imports due to this agreement.” The U.S. average monthly automotive exports to Korea under the FTA have been $12 million higher than the pre-FTA monthly average, but the average monthly automotive imports from Korea have soared by $263 million under the deal – a 19 percent increase. So while U.S. auto exports have risen very modestly under the FTA, those tiny gains have been swamped by a surge in auto imports from Korea that the administration promised would not occur under the FTA.

The post-FTA flood of automotive imports has provoked a 19 percent increase in the average monthly U.S. auto trade deficit with Korea. The Obama administration has sought to distract from this dismal result by touting the percentage increase in U.S. auto sales to Korea. This allows the sale of a small number of cars beyond the small pre-FTA base of sales to appear to be a significant gain when in fact it is not.