U.S. Trade Deficits Have Grown More Than 440% with FTA Countries, but Declined 16% with Non-FTA Countries

The aggregate U.S. goods trade deficit with Free Trade Agreement (FTA) partners is more than five times as high as before the deals went into effect, while the aggregate deficit with non-FTA countries has actually fallen. The key differences are soaring imports into the United States from FTA partners and lower growth in U.S. exports to those nations than to non-FTA nations. Incredibly, the U.S. Chamber of Commerce website states, “For those worried about the U.S. trade deficit, trade agreements are clearly the solution – not the problem.” Their pitch ignores the import surges contributing to growing deficits and job loss, while their export “data” is inflated, using tricks described below.

The aggregate U.S. trade deficit with FTA partners has increased by more than $147 billion (inflation-adjusted) since the FTAs were implemented. In contrast, the aggregate deficit with all non-FTA countries has decreased by more than $130 billion since 2006 (the median entry date of existing FTAs). Two reasons: a sharp increase in imports from FTA partners and significantly lower export growth to FTA partners than to non-FTA nations over the last decade. Using the Obama administration’s net exports-to-jobs ratio, the FTA trade deficit surge implies the loss of about 800,000 U.S. jobs. Trade with Canada and Mexico (our first and third largest trade partners, respectively) contributed the most to the widening FTA deficit. Under the North American Free Trade Agreement (NAFTA), the U.S. deficit with Canada ballooned and the small U.S. surplus with Mexico turned into a nearly $100 billion deficit. The trend persists under new FTAs – two years into the Korea FTA, the U.S. trade deficit with Korea has jumped more than 51 percent. Reducing the massive trade deficit requires a new trade agreement model, not more of the same.

Members of Congress will invariably be shown data by defenders of our status quo trade policy that appear to indicate that FTAs have generated an export boom. Indeed, to promote congressional support for new NAFTA-style FTAs, the U.S. Chamber of Commerce and the National Association of Manufacturers (NAM) have funded an entire body of research designed to create the appearance that the existing pacts have both boosted exports and reversed trade deficits with FTA partner countries. This work relies on several methodological tricks that fail basic standards of accuracy:

Chart: U.S. Trade Deficit Rises by $147 Billion with FTA Partners, Falls by $131 Billion with Rest of the World 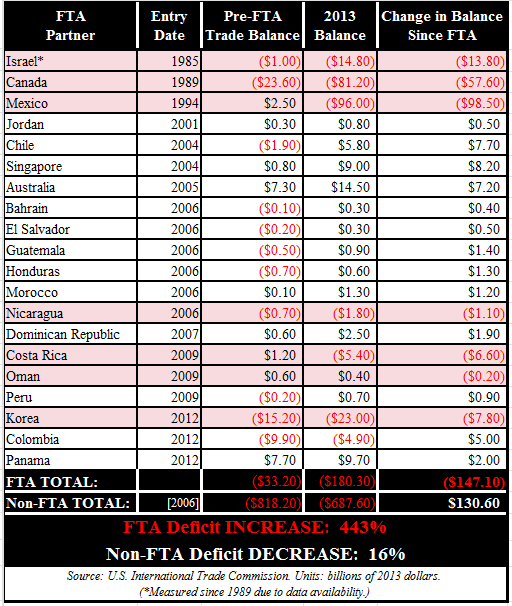