Home Archives Subscribe Back to TradeWatch.org
Pharmaceutical CEO: This Controversial Deal Will Be Great for Us…And You (Trust Us)
CAFTA and the Forced Migration Crisis

The Chamber of Commerce is a place of magic.  For its latest trick, the corporate alliance tried to make a $106 billion trade deficit disappear.

The Chamber took to its blog last week to highlight for readers “One Weird Fact About the Trade Deficit No One Has Noticed.”  Here’s the claimed “fact”: “in 2012 — for the 20 countries with which the United States has entered into a free-trade agreement (FTA) — the trade deficit vanished.”

A disappearing U.S. trade deficit with our FTA partners?  That’s not just weird – it’s incredible.  As in, not credible.

Want to know why “no one has noticed” this oddity?  Because it didn’t happen.

In 2012 the U.S. trade deficit with FTA partners topped $106 billion.  That includes trade in goods and services.  (If you just count goods, the deficit was $178 billion.)

And that mammoth FTA trade deficit is not “vanishing.”  The estimated U.S. trade deficit with FTA partners in 2013 is exactly the same: $106 billion.

The Chamber goes on to claim, “The United States has recorded a trade surplus in manufactured goods with its FTA partner countries for each of the past five years.”  The opposite is true.  The U.S. has run a major trade deficit in manufactured goods with its FTA partners in each of the last five years.  The average FTA manufacturing trade deficit during this period exceeded $48 billion. Last year, it topped $51 billion.

How does the Chamber claim to not see glaring FTA trade deficits?  By using some “weird facts” of its own.

The Chamber distorts the data by counting “foreign exports” as “U.S. exports.”  Foreign exports are foreign-made goods that pass through the United States without alteration before being re-exported abroad.  Along the way, they support zero U.S. production jobs.  And yet, the Chamber includes foreign-made exports alongside U.S.-made exports as if they had the same value for U.S. workers.

The graph below shows how this single data trick allows the Chamber to claim that a $106 billion FTA trade deficit has disappeared.  As the administration contemplates expanding the old deficit-ridden FTA model via the controversial Trans-Pacific Partnership, it seems that we should be looking at the actual evidence from past FTAs, not illusions. 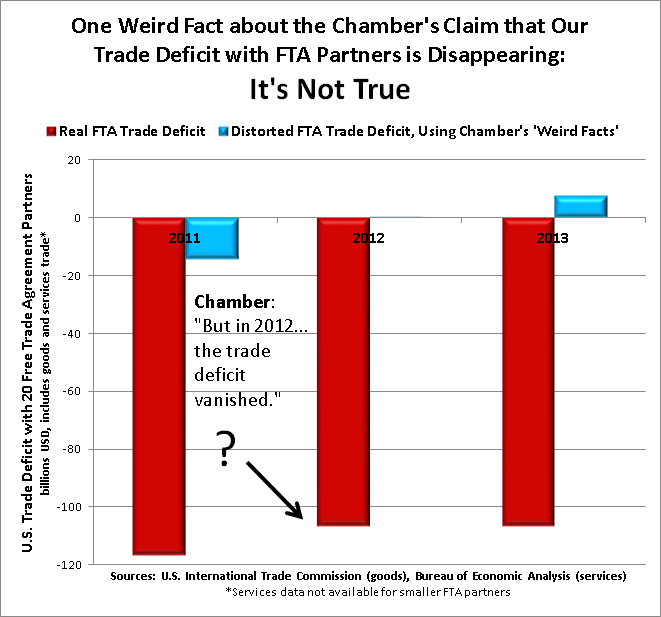