Home Archives Subscribe Back to TradeWatch.org
A Letter to Fair Trade Activists: While They Play Poker, Let’s Play Chess
U.S. Workers Should Not Be Pitted against Child Labor in Vietnam

Activists Worldwide Rally Against the TPP

While leaders from the 12 countries negotiating the controversial Trans-Pacific Partnership (TPP) agreement met around the margins of the Asia-Pacific Economic Cooperation (APEC) summit in China to discuss the agreement, activists and civil society from across the globe decided to stage some events of their own.

Throughout the week, rallies, creative actions, meetings, and town halls were planned in a number of countries to draw attention to the secret deal that threatens to limit domestic policies that promote food safety, access to medicine, internet freedom, and environmental protection. The deal would also empower corporations to sue governments in extrajudicial foreign tribunals, challenging public interest laws that they claim frustrate their expectations. (And that’s just what we know based on leaked texts, because the negotiations are taking place entirely in secret). 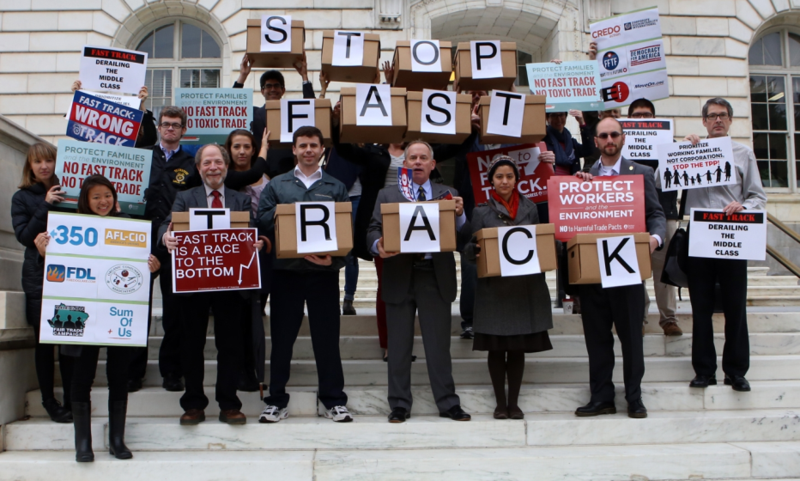 Over 700,000 petitions against Fast Track are delivered to U.S. Congress

In the United States, a broad coalition of labor unions, environmental, consumer, faith, online, and other groups assembled on Capitol Hill to deliver 713,674 petition signatures opposing “Fast Track,” the Nixon-era procedure that would empower President Obama to sign the deal before Congress is able to vote on it. Corporations are trying to revive Fast Track to railroad the TPP through Congress, as it would greatly limit lawmakers’ oversight over the content of the agreement by only allowing 20 hours of debate and forcing an up or down vote (with no opportunity for amendments).

The groups also launched an online campaign resulting in thousands of calls and hundreds of thousands of e-mails to Members of Congress urging them to vote “No” on Fast Track. Across the country, 20 rallies and town halls brought the anti-Fast Track message to lawmakers’ home districts. 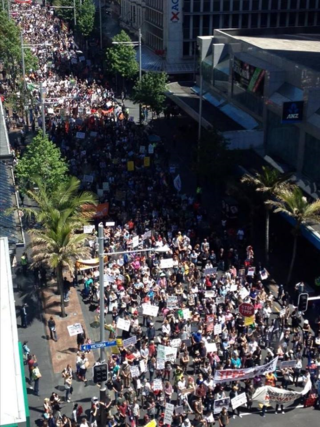 Thousands protest against the TPP in New Zealand

More than 10,000 New Zealanders took to the streets in 17 locations to protest the TPP, gaining national news attention and social media buzz, and pushing the #TPPANoWay hashtag to number 2 worldwide. Protesters were joined by lawmakers from a number of political parties, including leaders from the Green Party and Labour Party. Participants rallied against the secrecy of the negotiating process and TPP's inclusion of the controversial Investor-State Dispute Settlement (ISDS) mechanism, among other issues.

A number of flash mobs were organized around Australia. Opposition to the TPP was heard in Sydney, Canberra, Perth, Hobart, Adelaide, and Melbourne. A few days later, concerns about the TPP were represented during G-20 educational forums and protests which attracted thousands.

Australian protestors rally against the TPP in Perth, Hobart, and Sydney

While negotiators and corporate advisors are hiding their agenda in confidential documents, activists worldwide are spreading their concerns on the Internet, Twitter, Facebook, and e-mail blasts. While leaders and trade ministers are meeting behind closed doors in undisclosed locations, thousands of citizens are responding by gathering on the streets, in libraries, town halls, and their lawmakers’ offices.

The message of citizens across the globe is clear: we are not willing to accept a "trade" deal negotiated in secret in the interest of corporations and at the expense of our rights to safety, democracy, and health.

Are you sure that Democrats and liberals understand this issue? I ask because much of the lib media that has condemned the TPP also calls for pushing VP Joe Biden aside to nominate Hillary Clinton in 2016, in spite of Clinton's former work promoting the TPP.

Following Diane's comment:
Of course they don't!
These people are all Americans citizens and since we are all stupid, so are they.
Logical really.

The TPP is an undemocratic, sweetheart deal crafted by fat cats for the exclusive benefit of fat cats. It violates constitutional due process. It violates both health and environmental laws. It violates decent labor standards. No wonder they don't want the American public, and the world public, to know what a scurrilous piece of anachronistic junk it is. This thing must be killed. Also the similar trade accord with Europe, which is every bit as bad. Kill that one also!

So well written, please keep in tune with this subject. I say a job well done
Kind regards
Lisa wells-Baker