Heads Up for Distorted Data…

Given that the record of lagging U.S. exports and surging trade deficits under U.S. FTAs jeopardizes Obama’s prospects for obtaining Fast Track, the administration may try to obscure the results with distorted data. The USTR has taken to lumping foreign-made products in with U.S.-produced exports, which artificially inflates U.S. export figures and deflates U.S. trade deficits with FTA partners.

“Foreign exports,” also known as “re-exports,” are goods made abroad, imported into the United States, and then re-exported without undergoing any alteration in the United States. Foreign exports support zero U.S. production jobs. Each month, the U.S. International Trade Commission (USITC) reports trade data with foreign exports removed, providing the official government data on made-in-America exports. But the USTR likely will choose to use the uncorrected raw data, as it has in the past, that the U.S. Census Bureau released last Thursday, which counts foreign-made goods as U.S. exports. Our figures are based on the corrected data.

By using the distorted data, the USTR may errantly claim an aggregate trade surplus with all U.S. FTA partners, though the actual 2014 U.S. goods trade balance with FTA partners is a more than $177 billion trade deficit. By counting foreign exports as “U.S. exports,” the USTR can artificially eliminate more than two-thirds of this FTA deficit, shrinking it to less than $57 billion. The USTR may misleadingly claim an FTA trade surplus by then adding services trade surpluses with FTA partners, which pale in comparison to the massive FTA trade deficit in goods when properly counting only American-made exports. 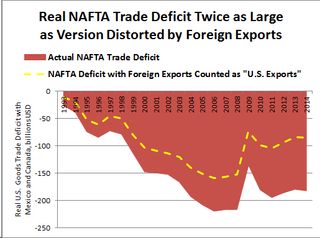 trade surpluses, the United States still had a projected NAFTA trade deficit of $50 billion in 2014. Indeed, the fossil fuels share of the NAFTA trade deficit declined in 2014, and U.S. exports of services to NAFTA partners fell, according to projections. The USTR can make its errant claim of a “NAFTA surplus” only by including foreign exports, which artificially reduces the NAFTA goods trade deficit to less than half of its actual size.

Moreover, U.S. exports to Korea have declined since the FTA went into effect and did not return to the pre-FTA level in 2014. Monthly imports from Korea repeatedly broke records in 2014, such as in October when imports from Korea topped $6.3 billion – the highest level on record.

Expect the administration to repeat the same data trick it employed last year with respect to U.S. auto sector exports to Korea. Exports to Korea of U.S.-produced Fords, Chryslers and General Motors vehicles increased by fewer than 3,100 vehicles per year in the first two years of the Korea FTA. But given that exports of “Detroit 3” vehicles before the FTA were also tiny – fewer than 8,200 vehicles per year – the USTR expressed the small increase as a significant percentage gain in a press release. The USTR did not mention that more than 184,000 additional Korean-produced Hyundais and Kias were imported and sold in the United States in each of the Korea FTA’s first two years, in comparison to the two years before the FTA, when Hyundai and Kia imports already topped 1 million vehicles per year.

OK. We all know TOP is a huge scam that will further erode our middle class, our democracy, and our very sovereignty, all for the benefit of the 1 percent. It's a given.
But what's with Obama in all of this? I saw a pro-tpp article coauthored by - excuse my spelling - Penny Pritzker, the hotel heiress who was once Obama's biggest supporter. Is he paying her back? Is he lining his pockets? Is he the ultimate 21st century schizoid man or the world's biggest hypocritical two-faced politician in history or simply misled by his ill-chosen advisers? I truly want to know so please tell me, what is the true skinny in this guy?

I've been opposed to these free trade agreements from since forever. Ever since I read John Gray's "False Dawn: The Delusions of Global Capitalism" I realized that the only beneficiaries of these deals are the capitalists and the corporations. Workers get screwed and eventually consumers get screwed as they no longer have the means to buy the products traded. This is the ultimate Ponzi scheme race to the bottom for workers'rights, environmental safeguards and decency in general. The real inconvenient truth is that capitalism is destroying us. We need to begin a discussion on viable alternatives for the economy, for the planet, for human civilization and for the future for our children before it's too late.