Home Archives Subscribe Back to TradeWatch.org
2014 Trade Data Deal Further Blows to the Push for Fast Track
Forthcoming TPP Sales Pitch So Predictable, We Decided to Predict It

A recent parade of reports from corporate lobbies and think tanks has played a familiar but discordant refrain, alleging that more of the same "free trade" agreements (FTAs) would boost U.S. exports and reduce the U.S. trade deficits that displace U.S. jobs.  It sounds nice.  But this tired promise is simply not supported by the data.

According to the official government trade data from the U.S. International Trade Commission, the aggregate U.S. goods trade deficit with FTA partners is more than five times as high as before the deals went into effect, while the aggregate trade deficit with non-FTA countries has actually fallen. The key differences are soaring imports into the United States from FTA partners and lower growth in U.S. exports to those nations than to non-FTA nations.

Why do we keep hearing arguments that more of the same will produce different results?  Well, if you (or your corporate backers) wanted to Fast Track through Congress the controversial Trans-Pacific Partnership (TPP), which would expand the status quo FTA model, you might also find it convenient to parrot the standard FTA sales pitch of higher exports and lower trade deficits.  In doing so, you would need to ignore these facts: 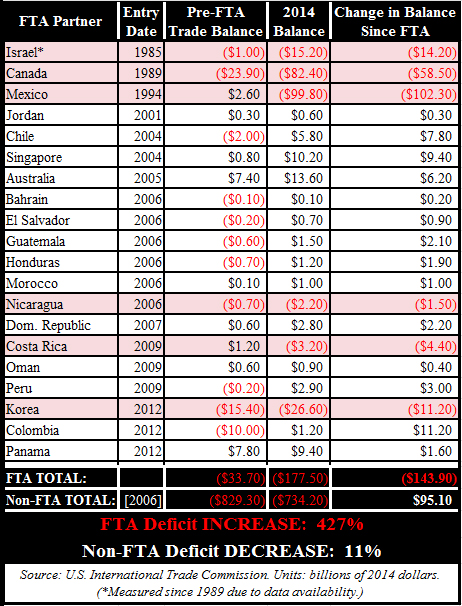 Some proponents of status quo trade have claimed that post-NAFTA FTAs have included higher standards and thus have yielded trade balance improvements. But the Korea FTA included the higher labor and environmental standards of the May 10, 2007 deal, and still the U.S. trade deficit with Korea has grown over 70 percent in the three years since the deal’s passage. Meanwhile, most post-NAFTA FTAs that have resulted in (small) trade balance improvements did not contain the “May 10” standards. The evidence shows no correlation between an FTA’s inclusion of “May 10” standards and its trade balance impact. Reducing the massive U.S. trade deficit will require a more fundamental rethink of the core status quo trade pact model extending from NAFTA through the Korea FTA, not more of the same.

Members of Congress will invariably be shown data by defenders of our status quo trade policy that appear to indicate that FTAs have generated an export boom. Indeed, to promote congressional support for new NAFTA-style FTAs, the U.S. Chamber of Commerce and the National Association of Manufacturers (NAM) have funded an entire body of research designed to create the appearance that the existing pacts have both boosted exports and reversed trade deficits with FTA partner countries. This work relies on several methodological tricks that fail basic standards of accuracy:

That there no public debate,that Congress is ignoring it ,that the mainstream media is not covering it much, if at all is a is disgusting, sick and a travesty and signs of the corporatocracy that our democracy has become.