Home Archives Subscribe Back to TradeWatch.org
Talking Point in Defense of TPP Is 95% Irrelevant
Seven Corporations that Could Sponsor Obama’s Controversial Trade Deal (If His Nike Endorsement Falls Flat)

Today’s release of U.S. government trade data covering the full first three years of the U.S.-Korea free trade agreement (FTA) reveals that the U.S. goods trade deficit with Korea has more than doubled. In addition, today’s U.S. Census Bureau data show Korea FTA outcomes that are the opposite of the Obama administration’s “more exports, more jobs” promise for that pact, which it is now repeating with respect to the Trans-Pacific Partnership (TPP) as it tries to persuade Congress to delegate Fast Track authority for the TPP.

U.S. goods exports to Korea have dropped 6 percent, or $2.7 billion, under the Korea FTA’s first three years, while goods imports from Korea have surged 19 percent, or $11.3 billion (comparing the deal’s third year to the year before implementation). As a result, the U.S. goods trade deficit with Korea has swelled 104 percent, or more than $14 billion. The trade deficit increase equates to the loss of more than 93,000 American jobs in the first three years of the Korea FTA, counting both exports and imports, according to the trade-jobs ratio that the Obama administration used to project gains from the deal.

“As if the odds for Fast Track were not already long enough, with most House Democrats and many GOP members stating opposition, today’s unveiling of a job-killing trade deficit surge under the Korea FTA puts a few more nails in Fast Track’s coffin,” said Lori Wallach, director of Public Citizen’s Global Trade Watch. “Who’s going to buy the argument about Fast Track and the TPP creating ‘more exports, more jobs’ when Obama’s only major trade deal, used as the TPP template, was sold under that very slogan and yet has done the opposite?” 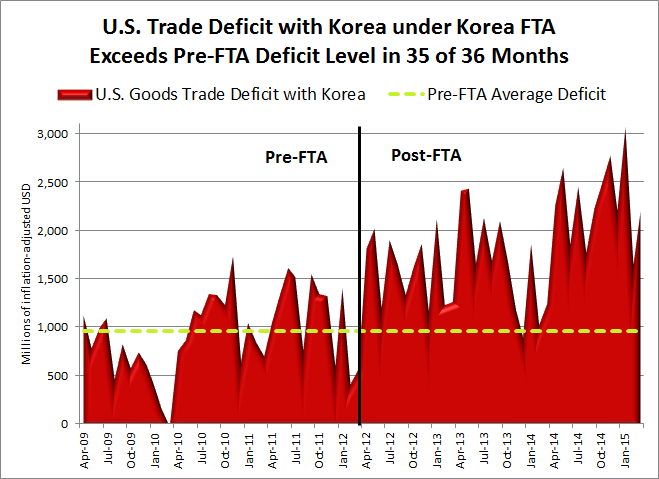 The administration has tried to deflect attention from the failure of its Korea FTA by claiming that its poor performance has been caused by economic stagnation in Korea. However, Korea’s economy has grown during each year of the Korea FTA, while U.S. exports to Korea have not.

U.S. exports to Korea are actually even lower than today’s numbers indicate and the U.S.-Korea trade deficit is even higher, when properly counting only made-in-America exports. The exports data in today’s U.S. Census Bureau release include “foreign exports” – goods made abroad, imported into the United States and then re-exported without undergoing any alteration in the United States. Foreign exports support zero U.S. production jobs, and their inclusion artificially inflates U.S. export figures and deflates U.S. trade deficits with FTA partners.

Each month, the U.S. International Trade Commission (USITC) reports the official U.S. government trade data with foreign exports removed, typically within two days after the U.S. Census Bureau releases the raw data. USITC likely will release the Korea trade data without the distortion of foreign exports by Thursday, May 7, at which point the more accurate – and even more negative – record of the Korea FTA will be made available at http://www.citizen.org/documents/Korea-FTA-3-years.pdf.