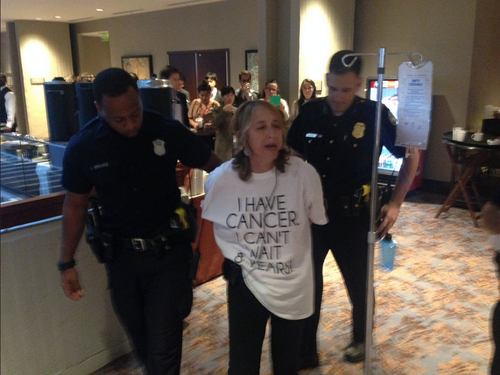 Today in Atlanta, cancer patient Zahara Heckscher was arrested after disrupting negotiations for the Trans-Pacific Partnership (TPP) in a protest aimed at maintaining access to affordable cancer medicines in the 12 countries affected by the trade treaty.

Heckscher, in a t-shirt reading "I HAVE CANCER. I CAN'T WAIT 8 YEARS," and holding an IV pole that read "TPP: Don' t Cut My IV,” refused to leave the Westin Hotel, the site of the negotiations between U.S. Trade Representative Michael Froman and the other TPP trade ministers. She demanded that they show her the secret TPP text to verify for herself and other people living with cancer around the globe that the TPP would not include a "death sentence clause," the text of the US proposal to extend de facto monopolies on biological medicines by up to 8 years.

Heckscher, a seven-year breast cancer survivor, calls herself a cancer thriver. She has been treated by biologicals including trastuzumab (Hercepin) and pertuzumab (Perjeta). She is currently undergoing chemotherapy as part of a clinical trial, and continues on denosumab (Xgeva) treatment as well.

According to Heckscher, "For thousands of women to die unnecessary of breast cancer because of the TPP is a horrible, cruel, premeditated, and avoidable catastrophe. The provisions being decided by TPP ministers today could allow drug monopolies on biologics for 8 years.  Some of these medicines cost up to tens of thousands, even hundreds of thousands of dollars a year."

"When you have breast cancer today, you can’t wait 8 years or 7 years or 6 years for a treatment to become available or affordable. When you have cancer, even a one-year delay in affordable medicine can be a death sentence. That is why we call this proposed provision of the TPP a 'death sentence clause.' If it passes, thousands of women like me will die waiting."

Like the 8-hour workday, child labor laws and a minimum wage, Labor Day is often taken for granted. Merely an extra day off.

But these immense contributions to our society’s wellbeing were hard-won by the labor movement.

What are unions – and all of us – doing as a nation to achieve greater progress and celebrate today’s workers, as well as the future’s? What are we doing the rest of the year to harm workers and roll back hard-fought gains?

One inspiring way in which the labor movement is partnering with environmental, consumer, faith and other civil society organizations to fight for a better quality of life for all Americans is to demand more fair trade and globalization policies. The fight against a more-of-the-same wage-lowering, job-killing trade agenda has generated more public interest and action than at any time in decades.

Why? Because the Obama administration sadly picked up where the Bush administration left off in negotiating the Trans-Pacific Partnership (TPP), a massive 12-nation NAFTA-style trade agreement.

With our grills cooled from Labor Day and the fall legislative season starting, it worth considering what cause workers might actually have to celebrate the TPP:

Does an agreement that forces workers to compete with workers in Vietnam, where minimum wages average less than 60 cents an hour, child labor is rampant and independent unions are banned, sound like a reason to revel?

Does Labor Day mean anything if our government is pushing to enact trade pacts that actually provide incentives for U.S. firms to offshore jobs to low-wage countries?

What middle class person – small business owner or her employee –would eagerly praise the gutting of Buy American policies, policies that recycle our tax dollars to create good jobs in the U.S.?

Would you toast to the fact that, though American workers have doubled productivity since the 1970s, they are still being paid 1970s-level wages? Especially since this yawning gap would only be widened with another status quo trade deal, exasperating the worst U.S. income inequality in the last century.

Are we honoring America’s workers by enacting trade pacts that don’t include binding rules against currency cheating that displaces U.S. jobs? The TPP closely models previous pacts that have not only failed to meet expectations for job creation, but also exacerbated the trade deficit and cost 5 million American manufacturing jobs?

Who could lounge by the pool on any day knowing the TPP allows countries that tolerate the trafficking of workers and migrants – a form of modern-day slavery – to participate in the agreement? Or worse, that countries like Malaysia would be given a pass on horrific trafficking violations because they are already participating in TPP talks?

Does a deal with 500-plus corporate advisors, and only a few public interest and labor groups, sound like it’s a promotion for workers? How about if it is being negotiated entirely behind closed doors?

Would America’s workers rest easy knowing this might be the last summer holiday before their families will be subjected to floods of unsafe food imports, increased medicine prices and worse environmental degradation?

How do we as a nation pause one day to celebrate workers, and then actively work on policies that harm their best interests the very next?

But there is one thing that is worth celebrating as we reflect on Labor Day: American unions are united with the unions in the other TPP countries to fight this corporate power grab branded as a trade deal.

Workers here and around the world have had to fight constantly for decent wages, dignity, respect and safety. Even against overwhelming amounts of money, power and corporate propaganda our grandparents and parents won the rights many now take for granted.

We can show we care about labor the other 364 days a year by uniting to give workers something back in return for all they do: a dead TPP, the gift that keeps on giving.

This will be yet another important labor achievement worthy of celebration come Labor Day 2016. 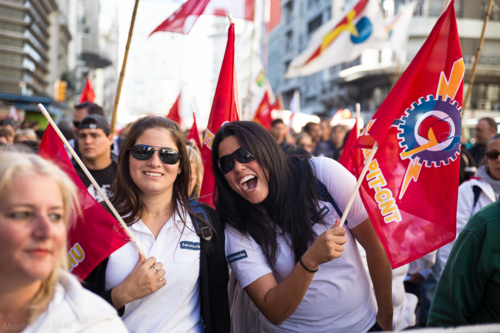 In a major victory against the corporate-driven trade model, the President of Uruguay has announced that the country will be leaving the controversial Trade in Services Agreement (TiSA) negotiations.

Uruguay’s initial decision to join the TiSA negotiations was met with strong and vocal opposition. Last month, more than 40,000 protestors shut down the city of Montevideo for a 24 hour general strike in which the TiSA was a major issue. The Frente Amplio (FA), Uruguay’s leading political party, passed a resolution calling for Uruguay to leave the negotiations, and yesterday, Uruguyan President Vázques officially announced Uruguay’s departure. Uruguay’s decision is in no small part thanks to the tireless efforts of many activists, labor unions, environmental organizations, and other civil society groups in the country.

And the Uruguayans are right to be concerned about TiSA. Comprised of 51 nations, negotiations on the “trade” agreement have been on-going since 2013. Much like its TPP and TAFTA counterparts, TiSA negotiations have been conducted behind closed doors, with no access for civil society or stakeholders. However, a number of leaks of negotiating documents have confirmed the worst: TiSA is a threat to key public services and domestic regulations that we rely on for commonsense financial regulations, data privacy, net neutrality and a number of other issues. And that’s just what we can confirm based on leaks.

While Uruguay’s rejection of TiSA is certainly a moment to celebrate in the fight against the global expansion of the corporate trade model, much work remains. Given what we know about TiSA, its completion would be disastrous for workers, consumers, internet users, and those in need of public services. Therefore, the campaign continues, and in the words of Rosa Pavanelli, General Secretary of the Public Services International global union (one of the groups leading the charge against TiSA), Uruguay’s decision is “an example that we hope others will soon follow.”